Friday Rant: The Liberals and Progressives Don't "Get It," Either 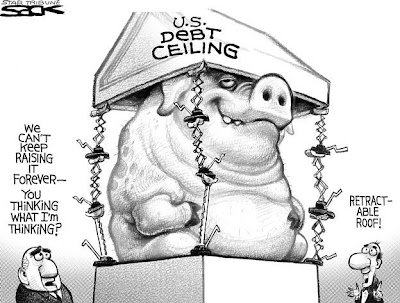 One thing you have to say for the debt ceiling debacle, it is really exposing a lot of our political and opinion “leaders” for what they really are. On the Republican and conservative side, the rapacious mania to slash social programs reveals once and for all the simmering hatred of the American right for the New Deal and Great Society programs that had long been thought to be untouchable sacred cows. Unfortunately, their rhetoric has been countered on the liberal and Democratic side by a lot of posturing that, however well intentioned, is completely out of touch with reality in this era of peak oil and resource depletion.

Many top liberal and progressive commentators have been deploring the GOP and even President Obama’s budget cutting zeal, but have refused to recognize that, however we managed to get to this point, the days when America could simply borrow its way back to prosperity have come to an end. In the past week alone, I have run across numerous examples in opinion pieces published on progressive websites that dramatically illustrate how clueless they are. What follows are half-a-dozen examples, and I am certain that had I kept looking I could have found many more. I’ve added my commentary afterward to each one.


Even Barack Obama has put cuts in those programs into play, warning ominously that a failure to lift the debt ceiling could cause the government to stop sending out Social Security checks. Why, when the Social Security trust fund is fully funded for the next quarter-century and is owed money by the U.S. Treasury rather than the other way around? Why would we pay foreign creditors before American seniors?

Commentary: The problem here is twofold. One, every dollar of Treasury debt redeemed by the Social Security “Trust Fund” INCREASES the deficit by the same amount. Secondly, if you blow off our creditors, where exactly is the Treasury going to borrow the money to redeem the debt it owes to Social Security?

Next up is Salon.com's Robert Becker, advocating that Obama ignore Congress and use the provision of the 14th Amendment to the Constitution that supposedly gives him the authority to raise the debt ceiling unilaterally:


Right off, all federal obligations would be covered, our enormous paper debts redeemed by our most sacred document. No mess, no fuss, no clean-up. The Treasury would have way more law on its side than 9/10s of what presidents do, even were goofy libertarians to rush into court. At the worst, way in the future, the Supreme Court might whine about ignoring precedent (though debt ceilings arrived after WWI, not with Founding Fathers). But what do you do about bills paid years ago -- ask for your money back? Right! You can, as they say, take the 14th all the way to the bank, any bank, any time.

Commentary: Actually, it sounds like the FDIC would have to quickly step in and take over that bank, as that would be a great recipe for a rapid devaluation of the dollar, with a corresponding explosion of food and energy prices—squeezing the consumer to the point where the economy crashes again. Liberals like Becker would then no doubt argue that we should once again double down on deficit spending, devaluing the dollar even further, sending food and energy prices even higher, crashing the economy again. Rinse and repeat until collapse mercifully ends the whole charade.

Then we have Dean Baker of the blog, Beat the Press, on stimulus spending:


This is a central point that needs to be made 300,000 times in the current debate over the budget. The deficits were very much containable until the collapse of the housing bubble sank the economy. It was the economic collapse that gave us large deficits.

This should mean that our politicians focus on getting the economy back to normal levels of output. If the unemployment rate was back at the 4.7 percent rate of 2007 the bulk of the deficit would disappear.

Commentary: There is NOTHING the politicians can do to bring the economy back to “normal levels of output.” If borrowing and spending an additional trillion dollars a year over and above 2007 levels had no effect other than to merely arrest the crash (as I demonstrated in my recent post “My Government Borrowed an Additional $3 Trillion Dollars and All I Got was this Lousy Chart”), then there obviously is no amount of insane deficit spending that will return the U.S. to a 4.7% unemployment rate. Once again, if we try, the result will be continued dollar devaluation and all of its accompanying ill effects leading to collapse.

Author and blogger Michael Hudson chimes in on the Social Security “Trust Fund”:


Of course the government will have enough money to pay the monthly Social Security checks. The Social Security administration has its own savings – in Treasury bills. I realize that lawyers (such as Obama and indeed most American presidents) rarely understand economics. But this is a legal issue. Obama certainly must know that Social Security is solvent, with liquid securities to pay for many decades to come. Yet Obama has put Social Security at the very top of his hit list.

Commentary: With all due respect, Mr. Hudson, clearly it is YOU who doesn’t understand economics. Once again, the Treasury bills have to be redeemed in order to pay Social Security benefits, adding to the overall federal deficit. Ergo, the Social Security administration has no “savings,” merely a gigantic pile of IOUs.


Social Security is currently in sound shape and is not projected to undergo any shortfalls until 2037. Before that point, as labor attorney and author Thomas Geoghegan has compellingly argued, simply taxing incomes above the current Social Security cap of $106,800 would cover future shortfalls.

Commentary: Once again, as I explained in my recent post “The Social Security Trust Fund is a Lie,” Social Security is expected to have a shortfall of $45 billion right now in 2011! And that is even BEFORE the first Baby Boomers become eligible for full retirement benefits next year. Lifting the Social Security tax cap might be a sound idea from an economic fairness standpoint, but all it would accomplish in fact is delaying the inevitable collapse of the system by a few years at best.

Oh, and here is Bybee’s “solution” for fixing the economy:


One obvious cure would be a big stimulus program like rebuilding America’s eroding infrastructure. But the GOP is entrenched against any new government spending, no matter how efficient or vitally needed. Why should they vote for a stimulus that would enhance Obama's reelection chances in 2012?

Commentary: No doubt that America’s infrastructure is crumbling, and no doubt the GOP is motivated to see Obama defeated next year, but that doesn’t change the fact that Obama already tried spending $700 billion with his 2009 stimulus plan without any discernable effect in fixing the economy. This just shows how bankrupt mainstream liberal ideology has become. Their answer to every economic ill is merely to throw money at the problem. The more you borrow and spend in a resource depleting world in which the real economic growth needed to service the increased debt load is impossible, the more quickly that money devalues and faster the economy will collapse.


The only way out of the vicious economic cycle is for government to adopt an expansionary fiscal policy — spending more in the short term in order to make up for the shortfall in consumer demand. This would create jobs, which will put money in peoples’ pockets, which they’d then spend, thereby persuading employers to do more hiring. The consequential job growth will also help reduce the long-term ratio of debt to GDP. It’s a win-win.

Commentary: No, Robert, it is in fact a lose-lose. The real economy cannot expand absent a dramatic increase in the availability of oil and other resources. Without real economic expansion, the ratio of debt to GDP will continue to explode until the whole debt saturated economy collapses in a heap. Reich, like all of the other commentators above, seems to be going to great lengths to avoid telling his readership the truth: that however much they may hate what’s coming, hard choices DO have to be made, and if we continue to avoid making them reality will impose its own radical solution.

Deplore the Republicans and conservatives if you will. Lord knows they have very much earned your contempt. But at the same time, don’t fall into the tired old trap that of believing that just because one side is wrong the other side must be right. Both sides, at least in their public pronouncements, appear to be completely clueless to the fact that we have entered a new paradigm of permanent contraction in which conventional economics no longer works. They continue to try to apply outmoded methods based upon outdated theories. And that is the biggest reason why an economic train wreck now appears to be unavoidable.
Posted by Bill Hicks at 6:54 AM