Why We’re Screwed (Part 3): The Social Security “Trust Fund” is a Lie 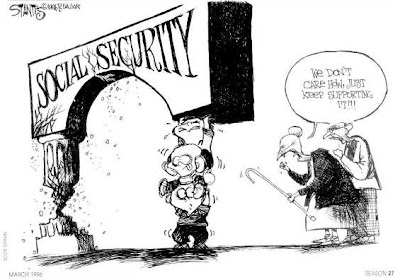 After I began this “Why We’re Screwed” series as the U.S. Government debt limit showdown D-Day approaches, I received several inquiries from readers asking why Social Security benefits are on the table to be slashed given that the Social Security Trust Fund is supposed to make up any gap between revenues and benefits payments. It’s actually a very good question. The short answer is that the Trust Fund is a gigantic lie being used to pull the wool over people’s eyes so they won’t realize just how bad America’s fiscal situation really is.

As for the longer answer, the first thing you need to know about Social Security is that it’s a pay-as-you-go program. That means that today’s benefits are paid for by current year payroll tax collections. Any extra payroll taxes collected over and above the amount paid out in benefits rolls over into the Social Security Trust Fund. Prior to the financial crash of 2008, the Social Security program had enjoyed many years of large surpluses. According to Wikipedia, as of the end of calendar year 2010 the accumulated amount in the fund stood at just over $2.6 trillion. Had that money be placed into real revenue generating assets, the U.S. Government could have withstood payroll tax collections dropping below benefit payouts for a long time.

Unfortunately, the crash could not have come at a worse time—the very year that the oldest members of the Baby Boom generation became eligible to take early (though reduced) retirement benefits. It has long been recognized that the size of the Baby Boomer population bulge was eventually going to cause Social Security to begin running an accounts deficit and thus have to dip into the Trust Fund. Up until just a couple of years ago, that wasn’t expected to happen until around the year 2020.

Well, guess what? It’s already happened. During 2009, the payroll tax surplus disappeared as more Boomers than expected opted for early retirement benefits, presumably because they had lost their jobs during the Great Recession. Then, in one of the more insane ideas to come out of Washington in a while, President Obama and the Republican congressional leadership agreed in December 2010 to slash the payroll tax from 6.2% of the first $106,800 of every wage earner’s income to only 4.2% as a (rather desperate) way of stimulating the economy. This meant that Social Security’s revenue stream was being reduced by the short-sighted politicos just as the program was beginning to run in the red. Sure enough, a month later the Congressional Budget Office estimated that Social Security’s account deficit in 2011 would be approximately $45 billion.

All of this still might have been survivable for awhile if the Trust Fund really existed. Unfortunately, when it was set up it was required by law to buy Treasury securities, which means U.S. Government debt. As Wikipedia explains it:


“These [Trust Fund] balances are available to finance future benefit payments and other Trust Fund expenditures – but only in a bookkeeping sense. They do not consist of real economic assets that can be drawn down in the future to fund benefits. Instead, they are claims on the Treasury that, when redeemed, will have to be financed by raising taxes, borrowing from the public, or reducing benefits or other expenditures.”

So in effect, the U.S. Government has been filling up the Trust Fund with IOUs that can only be cashed in at the cost of increasing the deficit. It’s like raiding your son’s piggy bank to buy cigarettes and leaving a promissory note. Do it often enough and there’s no cash left in there, and your son will be mighty disappointed when he tries to go buy that new toy he really wants.

Now you know why the politicos are suddenly so hot to trot to slash Social Security benefits. The program has gone from being a net plus, whereby they could use its surpluses to mask the size of the deficit, to being a net drain that is now directly increasing the deficit. The blindingly obvious fact that they are the ones responsible for this state of affairs seems not to register with them.

Even more disconcerting is that as of next year the first Baby Boomer retirees, those born in 1946, will be eligible to receive FULL (not reduced) Social Security benefits. Without cuts in the program this year, the net drain on the U.S. Treasury is about to get a whole lot worse.

These are the facts you need to know in order to have any understanding of what’s at stake in the debt ceiling battle. For the last 30 years, America has been living high on the hog on money borrowed from the future. Now the future is here, and NOBODY wants the programs that benefit them to be the ones cut in order to reduce the deficit. The politicos find themselves trapped in a box from which not even they will be slimy enough to worm their way out.
Posted by Bill Hicks at 6:42 AM