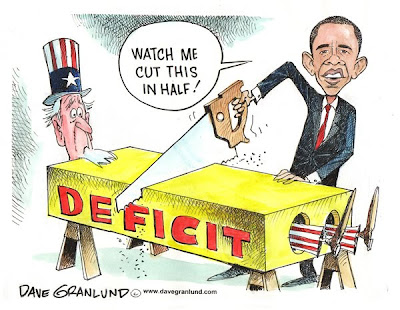 The federal debt limit debate is heating up in Washington, with just over three weeks to go until the nation defaults on its debt obligations. Last week, President Obama offered up cuts in government programs, including Social Security and Medicare, in order to try to reach a compromise with the Republican leadership. There was only one little problem with the President’s strategy, as reported by Talking Points Memo:


“Despite all the talk about cutting the deficit, neither party has wanted to be the first one to put entitlements on the chopping block. A Pew poll released Thursday explains why, as it shows that a robust majority of Americans don't want the government to rollback benefits for entitlement programs, even if those cuts are made to reduce the deficit.

“Six in ten Americans said it was more important to leave Social Security and Medicare benefits untouched than to make cuts as a way to reduce the deficit, roughly twice as many as the 32% who said the opposite. Further, 61% said Medicare recipients already pay enough of their health costs, while 31% said beneficiaries should pay more money into the program.”

My regular readers will recall a post I wrote a couple of weeks ago chastising the American Association of Retired Persons for initially saying it would be willing to accept some cuts in social security benefits. My point at the time was that nobody should pay dues to any self-interested organization that was more inclined to protect its own perquisites than fight on behalf of its membership. Well, the AARP must have gotten a real earful from its members in the meantime, because it has reversed course and is now claiming it will fight against any cuts in Social Security benefits, even through the back door of changing how the cost of living index is calculated.

Anyone who has been paying attention to what is really going on knows that America is rapidly approaching the endgame of 30 years of reckless fiscal policies. Since the election of Ronald Reagan and the subsequent massive ramp up of borrowing both by the government and private sector, much of America’s economic “growth” has become dependent upon cheap and easy credit. The problem is, as any individual who has ever declared bankruptcy could tell you, borrowing huge amounts of money is a great way to maintain the illusion of prosperity until the day finally comes when you can’t borrow anymore. After that, you’re in deep trouble.

America is in deep trouble. Not only have we reached the point where continuing to expand our borrowing will destroy the remaining value of our currency, but because of the rampaging economic effects of peak oil we can no longer maintain the growth we need to service the debts we already have. Since the beginning of the economic crisis of 2008, the federal government has been borrowing approximately 40% of the money it spends. Entitlement programs, of which Social Security and Medicare are the two largest, together with so-called “defense” spending constitute approximately two-thirds of the federal budget. That means you could cut everything else, including interest payments on the national debt (which would, of course, mean default) and the budget would STILL not be balanced.

The only way to even begin to tackle this predicament is if funding for domestic federal programs is reduced across the board, defense spending is slashed by half or more and taxes are increased on those with the most ability to pay. Even these drastic actions, however, will only buy us some time to begin adjusting to the new reality—permanent peak oil-induced economic contraction—before it becomes necessary to go through the whole exercise all over again. What this strategy would allow is some semblance of an orderly descent, though it would obviously inflict massive amounts of economic pain on the majority of Americans.

As you can see from the results of the Pew poll, however, the equal-pain scenario I just outlined is a political non-starter. Every group is going to fight like a rabid Rottweiler to avoid their slice of the pie being cut, from senior citizens who rely upon Social Security and Medicare, to farmers who rely upon agriculture subsidies, to government employees protecting their salaries and benefits, to defense contractors who have grown fat and happy from lavish Pentagon spending. Meanwhile, the corporate elite who really run things will be continuing to transfer as much of the nation’s wealth as possible into their own hands.

The outcome of the debt limit fight is going to be very interesting to watch as what it really represents is the first time the country has been faced with making hard choices and can no longer “kick the can down the road” with the bill being paid by future generations. The outcome of the battle ought to give you some idea of just how ugly these kinds of fights are going to be in the future when the choices REALLY start to get tough. Let’s just say that I am far less than optimistic for any kind of positive outcome.
Posted by Bill Hicks at 6:01 AM