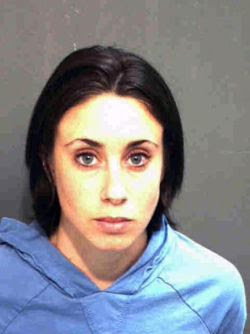 As I stated in a previous post, I didn’t follow the Casey Anthony trial. In fact, because I rarely watch television I only became aware of the whole sad, sorry spectacle a few weeks ago. Now the verdict is in, and much as I may have wanted to I couldn’t avoid hearing the results. It seems that everyone in America except the people sitting on that jury think she's guilty of murder.

Okay, maybe she did kill her daughter. Maybe she really is a sociopathic, inhuman monster. Like I said I didn’t follow the case, so I can’t speak authoritatively regarding the evidence against her. There are many things to deplore about this case and how it came to be a sick national obsession, most of which are already being pored over ad nauseum in many other quarters.

Instead, let me pose a question I don’t think is being asked but seems entirely relevant: what if Casey Anthony really is innocent of murder? What if the only thing she is guilty of is what she was convicted for, lying to the police and not reporting her daughter's death? If so, it certainly wouldn’t be the first time there was a rush to judgment that turned out to be entirely wrong.

I ask that question not to defend her, but to point out that if she did happen to be innocent of the crime of murdering her daughter, the shameful way the whole situation has been exploited by our corporate owned and utterly corrupted mainstream media has effectively ensured that when she gets out of jail she will not be safe walking the streets anywhere in the country. Far too many people who've been whipped into a rabid frenzy by the media would be willing to form a lynch mob and string her up from the nearest tree.

America has a long, sad, sorry record when it comes to lynching people, especially blacks, that we finally overcame just a couple of generations ago. Seeing any mob braying for retribution even after the accused has faced a jury of her peers ought to make our collective blood run cold, however despicable the defendant might appear to be. In this case that mob is literally tens of millions in number, which ought to frighten the living hell out of anyone who believes that the justice system, however flawed it may be, is all that stands between civilization and barbarism.

If I had my way, every mainstream media figure who participated in whipping up this terrible holographic lynching along with the management and owners of the networks that presented it as the latest high rated reality show, would themselves be confined in Casey Anthony's cell block. Nancy Grace, in fact, would warrant a life sentence. Without their their hideous manipulations, this would have been just another routine murder case, and maybe, just maybe, true justice would have been served.

Those among the general public who obsessed over this unfortunate woman’s fate really ought to be ashamed of themselves. Let it be enough that Casey Anthony is going to remain a virtual prisoner of her own infamy for the rest of her life. Your country is being stolen right out from under you by the same assholes that own the networks that turned her travails into a voyeuristic spectacle. Wake the fuck UP, already, and direct your anger instead towards those who so richly deserve it--the ones who are screwing you every day of your lives.
Posted by Bill Hicks at 7:56 AM