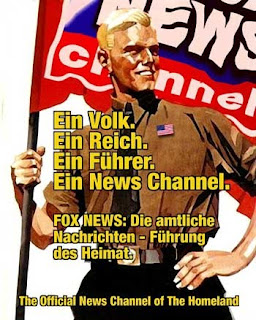 I swear I must be cursed. Just a few days ago I posted on this very blog my thoughts and feelings about the coarsening effects television is having on American society. So sure enough, the very next day the gods were laughing as I found myself stuck in a waiting area where there was the omnipresent television screen. Making matters worse, this one was not only tuned to Fox News but actually had the sound turned up. There were about a half-dozen guys there with me, all of whom were more or less paying attention to the broadcast—so I steeled myself and started counting the minutes until I could get out of there.

Initially, the coverage was of the just completed Greek austerity vote and the subsequent rioting in Athens. The guest talking head intoned gravely that approval of the pact had been necessary to prevent a financial crisis in Europe that could spill over and negatively affect the United States. The fate of the Greeks themselves was completely irrelevant to his analysis. So what the hell ever happened to Fair and Balanced? Never mind, silly me.

Mercifully, after a couple of minutes they went to commercial break (you know it's bad when you are ROOTING to be bombarded by advertisements) and I was hoping I could get out of there before the broadcast resumed.

Cut to a Goldline commercial loudly proclaiming that with all of the government deficits you can buy Eagles, gold bars and Krugerrands for “just 1% over dealer invoice.” Got it, plebes? That horrible Muslim, Socialist, Nazi black guy in the White House is just a-fixing to crash the economy. Better buy your overpriced gold now before it's too late.

Don't these idiots know that if they get Raptured they can't take it with them?

To my chagrin, I was not able to leave before the bubble-headed, bleach-blond anchor came back on the air. “This next story will SHOCK and upset you,” she intoned gravely. Oh boy, this ought be good. So much for We Report, You Decide.

Cut to a segment about a letter of complaint (horrors!) made by some so-called religious groups against the director of a Veterans Affairs cemetery (evil bureaucrat!) in Houston (Heaven, Hell or…) for allegedly banning the word “God” (heathens!) and requiring that prayers be submitted for prior government approval (Godless Commies!).

The president of one of the groups was shown making an angry statement and then some old hag was interviewed and got in exactly one line: "How did I feel? I probably shouldn't say how I felt because it was absolutely appalling that this woman would come aboard and tell us we can not say 'God bless you’.” (editors note: in writing this post, I obtained the exact quote used in the story from the website of the Fox affiliate in Houston, and I shit you not, the word “appalling” was spelled with only one “p”).

After that whole mess, the “reporter,” then started adding his slant. That was it. No one from the VA was interviewed (presumably they must be smart enough to know better), no evidence was presented in support of the allegations and, bizarrely, not one specific instance of what these groups were asserting was described for the viewer.

And yet, about half way through the story one of the guys in the waiting room with me—the only black guy present, incidentally—got all indignant. “That’s just unbelievable,” he said. “What is this damn country coming to, anyway?” So much for redneck stereotypes.

I’m normally smart enough to keep my yap shut in such situations, but this time I felt like my head was going to explode. "Oh come on," I said. "That doesn’t even make good NON-sense. They didn’t provide one lick of proof to support their claims."

This failed to placate him. "But they couldn’t report it unless there was SOME truth to it," he insisted.

At that point I was already regretting speaking up, so I just said I didn’t believe a word of it and let it go at that. A couple of minutes later it was time for me to leave and I got out of there as fast as I could. Though the situation didn’t escalate into an argument, I felt drained as I was driving home that afternoon, as I do every time some little incident happens that proves to me yet again why we have no hope of turning things around in this country.

I shouldn’t have been surprised that a mere ten minutes’ exposure to Fox News would leave my head hurting. That’s just a given. And it is not their political slant that is the worst of it, appalling as it is, but just how badly they are dumbing down the discourse in this country under the guise of “journalism,” and just how easily their viewers are led astray. Pandering to the prejudices of elderly shut-ins is one thing, but this guy was about thirty-five and prosperous looking.

Sadly, I know all too well the answer to the question of where the FCC is: totally corrupted and de-fanged as a regulatory institution. Somewhere, the ghost of little Joey “Clubfoot” Goebbles is raising his glass in honor of Roger Ails and Rupert Murdoch while making a toast to a job well done.
Posted by Bill Hicks at 6:09 AM