Well, OF COURSE No One in the Presidential Campaign Really Wants to Talk About Foriegn Policy 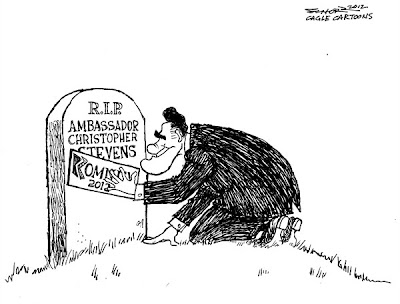 Could the insanely stupid presidential campaign get any stupider? The answer to that question appears to be yes after Willard made quite a spectacle of himself by bizarrely attempting to politicize the attack on the U.S. Consulate in Benghazi, Libya, before the death of U.S. Ambassador Christopher Stevens was even confirmed. In its own particular liberal, toadying-to-power way, the Atlantic Wire tried to explain the problem in an article entitled, "No One in the Presidential Campaign Really Wants to Talk About Foreign Policy":


The conservative backlash to the backlash to Mitt Romney's comments on the attacks on U.S. embassies in Cairo and Benghazi Wednesday goes like this: You media people said you wanted Romney to talk about foreign policy, and now he is. What's the problem? Well, it's that no one — both campaigns and political press corps included — seems to really want to talk about foreign policy. The debate Romney wanted to get into on Wednesday wasn't a substantive one on actual foreign policy and how to make sure the new governments created by the Arab Spring remain friendly to the U.S. Romney instead wanted a cable news shoutfest about whether Obama made us look like wimps abroad. Instead the cable shoutfest was over whether Romney is qualified to answer 3 a.m. phone calls. You can understand why Romney supporters would like to change the subject. As National Review editor Rich Lowry wrote for Politico this morning:

Lowry writes that foreign policy debate doesn't stop just because Americans die, and that wars and violence have always been campaign fodder. Likewise, a Wall Street Journal editorial is headlined "Romney Offends the Pundits." Subheadline: "Doesn't he know he's not supposed to debate foreign policy?" And The Weekly Standard's Bill Kristol says Romney is "right to reject the counsel of the mainstream media," and that he should use a crisis for political purposes.

"Still, the fact remains that the events of September 11, 2012, represent a big moment for the country. Romney is right to sense this, and to seize on this moment as an occasion to explain the difference between his foreign policy and President Obama’s."

It's true that during Romney's press conference Wednesday, every question reporters asked was whether Romney felt bad about issuing a political statement before he knew Ambassador Christopher Stevens had died. But it's not just the timing that has pundits, including Republican ones—not to mention one anonymous Romney aide whose comment was deleted from a New York Times news story—saying Romney mishandled the events. It's also that Romney got one small fact wrong, claiming the Obama administration's "first response" to the attacks was to apologize, when, in actuality, the Cairo embassy had posted the statement in question before the protests, before anyone died, and before getting approval to do so from the State Department.

Then there's Romney's larger statement—a talking point he's promoted for years—that Obama has been overly concerned with the hurt feelings of Muslim radicals who want to kill Americans. For once thing, Obama hasn't done that much IRL coddling -- Lowry describes the "signature Obama foreign policy success," as "killing people." For another, in 2010, Romney himself condemned an American preacher who was going to hold a Koran burning because, "It puts troops in danger, and it violates a founding principle of our republic." But that was two years out from the presidential election, not two months.

As the article states, Obama's signature foreign policy success has been killing people, which will no doubt be Romney's primary foreign policy pursuit should he be elected to replace him in November. It is what should be expected from a declining empire that can feel the sands of history shifting under its feet and knows no other way to try and forestall its inevitable downfall.


Bonus: "Even Richard Nixon has got soul"