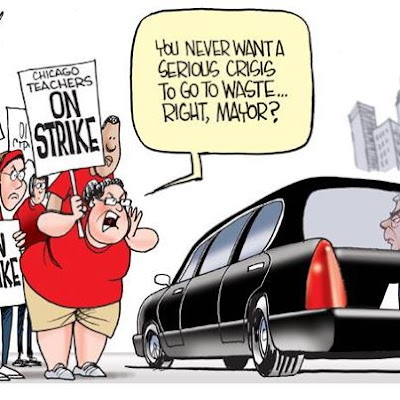 Let’s cut through all of the bullshit and get down to the brass tacks of what the Chicago teachers’ strike is really all about: a desperate, last ditch effort on the part of one group of public sector employees to prevent the inevitable downward slide that will cause them to slip out of the middle class for good. The petty details matter little in the big picture. The teachers are in a literal fight for their livelihoods and it is a fight they are eventually going to lose, if not this time around then at some point in the near future.

I’ve recently been reading the excellent book, Staying Alive: the 1970s and the Last Days of the Working Class, which recounts among other things the last great wave of labor unrest in America that occurred during the first half of that decade, when a new generation of union insurgents battled both corporate management and the ossified, complacent bosses of their own unions in an effort to revitalize, expand and strengthen the labor movement. For a brief, shining moment it appeared that they might be successful in those struggles, and then the economic malaise resulting from the 1973 and 1979 oil shocks combined with the first wage and job destroying effects of globalization to subvert and undermine what they accomplished. Shortly thereafter shrewd conservative charlatans like Ronald Reagan learned how to get workers to vote against their own economic interests by pandering to superficial patriotism and cultural prejudices. Reagan and his ilk were, of course, greatly assisted in those efforts by a liberal movement and a Democratic Party that abandoned the working class in favor of divisive identity politics and political correctness.

Flash forward to 2012, and what we are seeing now in the Chicago teachers’ strike is the last gasps of a labor movement that is all but completely dead in America. The power of unions in the private sector has already been mostly neutered by thirty years of piss poor and corrupt "leadership" combined with relentless corporate assaults and by “free” trade pushing politicians of both parties. While all that was going on, the public sector unions stood idly by while their private sector brethren’s livelihoods were slowly being stolen from them. And now that all those earlier battles have been lost, there is no one left to stand by the side of the teachers in their hour of need. In fact, judging by the vitriol being heaped upon the “greedy” teachers by their fellow laborers in internet forums and chat rooms, I’d say that the powers that be have been quite successful in their relentless campaign to turn all of us proles against one another so we don’t ever recognize who the true enemy is and unite against them.

The most telling sign I saw indicating that the teachers are doomed was when snot-nosed little punk Paul Ryan issued a statement of support for the heinous Chicago Mayor and Obama confidant Rahm Emmanuel. I’ve said it repeatedly on this blog, but in bears saying yet again: however much they may make a show of viciously fighting against one another, it’s when the two parties agree on a particular issue that you really need to grab hold of your wallet. If the teachers and other working and middle class citizens of this country had at least one of the major parties fighting on their behalf, they might stand half-a-chance of preventing their eventual impoverishment and destitution, or at least they could ensure that the selfish rich assholes who run the country share the sacrifice as the long era of economic growth draws to a close. But they don’t, and what’s worse most of them don’t even realize that they have in fact been completely abandoned by both major parties.


Bonus: I just had to post this clip since the irony of douchebag conservative economist extraordinaire Ben Stein portraying a Chicago area public school teacher giving a lesson about the Laffer Curve is just too delicious.