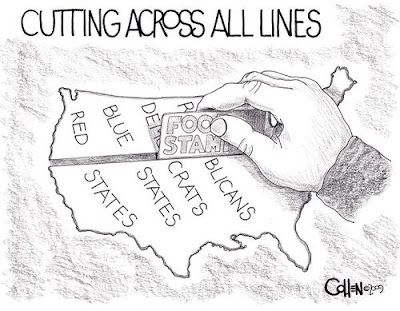 You really have to hand it to asshole conservatives and the doctrinaire libertarians for how successful they have been in turning us plebes against one another so that we don't turn around and see that it's the face of the oligarchs that is connected to the big red, white a blue dick they are shoving up our asses on a daily basis. The brillance of their campaign to demonize poverty even as they strive hard to drive even more members of the former working and middle classes into poverty was on display again this week, as reported by Digital Journal:


Cindy Nerger of Warner Robins, Ga., who has been on a waiting list for kidney transplant for five years, was brought to tears at a supermarket last week when a clerk ridiculed her in the presence of other customers for using food stamps. Local TV station WMAZ, reported the incident after Nerger posted her story on the station's Facebook page.

She said she went shopping last week Tuesday at the Kroger off Watson Boulevard. When she got to the register, the clerk insisted wrongly that $10 worth of items were not covered. She said: "He told me I owed him 10 dollars and some change. I am not exactly sure what it was, but I told him, I said I am sorry sir, but there is nothing in my cart that is not covered by food stamps." According to Nerger, Kroger employees kept her on the line for half an hour.

A store manager finally intervened and told the clerk to give her the items. When she complained about the treatment she received, the the clerk said aloud: "Excuse me for working for a living and not relying on food stamps!" Nerger said at this point she was so embarrassed that she broke down in tears. She said: "I was upset, so, I was like, you know, I told you that it was covered under food stamps, you know, so, there was no need for all of this, you know, and he said, 'Well excuse me that I work for a living and don't rely on food stamps like you.'" She added: "I honestly was angry. I was angry at first, but it turned into tears because when I turned around and I saw the people there I was like, oh my goodness, and I just started crying."

According to The Huffington Post, Nerger, 28. said she and her husband were not proud to use food stamp debit card. She told The Huffington Post, "I felt shy when I used them and my husband does, too. I would try to hide the card." She said, "I didn't want to have to go there, you know, nobody wants to have to ask somebody for help, but it got to the point it was either ask for help or starve."

The Huffington Post reports Nerger said she started receiving food stamps (Supplemental Nutrition Assitance Program) after she fell ill in 2008 and became eligible for Medicare and Social Security Supplemental Income. While she is on waiting list for kidney transplant she cannot work because of daily 12-hr dialysis treatment. According to Nerger, her husband runs a carpentry business but does not make enough income to sustain the family without assistance.

No doubt that idiot grocery store clerk, who is probably living paycheck to paycheck himself, never gave a moment's thought that he could very easily find himself in Cindy Nerger's shoes at some point in the future. Funny that it is often those who are the closest to actually needing the social safety net who often times are the ones who scream the loudest about it.

I'd so like to take that asshole clerk for a visit to the corporate headquarters of Dyncorps International, or SAIC or General Dynamics so maybe he could get it through his thick fucking skull who the real welfare queens are. Those war contractor assholes and others of their ilk are sucking down many, many times more of his precious little tax dollars that all of the Cindy Nergers of the world combined. Or maybe a little tour of Wall Street and all of the giant financial firms that have been bailed out to the tune of hundreds of billions of dollars and whose executives continue to rake in millions of dollars in bonuses while laughing their asses off that fucking morons like him continue to listen to fat fucking pig Rush Limbaugh and to vote for the politicians that enable them to rob him and tens of millions of others like him of their livelihoods, security and futures.

Oh, who am I fucking kidding. Like there is ANY chance that a closed-minded simpleton who lacks even one iota of basic human empathy would fucking understand any of it even if you rubbed his fucking face in it. In fact, you know what? Fuck that asshole. Fuck him and every ignorant fucking piece of shit like him. I have had it with all of them. If someone in this country has to find themselves starving and destitute because of the heartless policies he so foolishly supports, let it someday BE him. I just hope I can be there when it happens to sneer and tell him to get a fucking job.


Bonus: Sorry, I think I was actually channeling angry Bill for a moment there