America "Hearts" Democracy in Burma, Loathes it at Home 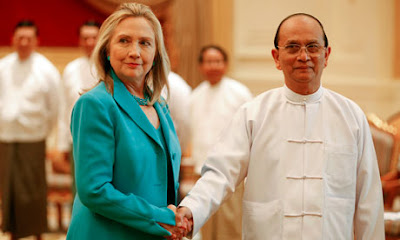 image: That's our Hillary, never saw a dictator whose ass she didn't want to kiss in the name of neoliberal globalization.

If the "leaders" of this country were any more fucking full of themselves they would all explode, covering the entire DC metropolitan area in a layer of shit several feet deep. Case in point is a story this week about the assholes falling all over themselves to honor Burmese human rights leader, Aung San Suu Kyi:


Democracy icon Aung San Suu Kyi will receive the US Congress’s highest honor on Wednesday during a landmark trip in which she has called for the lifting of sanctions on her native Myanmar.

The Nobel peace laureate was awarded the Congressional Gold Medal in 2008, during the 15 years she spent under house arrest, and is only able to receive it now as relations thaw between the United States and the South Asian nation.

On Tuesday Suu Kyi thanked the United States for its years of support but said further reforms must proceed without the pressure of sanctions and insisted improved relations with Washington would not pose a threat to Beijing.

“In the end, we have to build our own democracy,” she said in a speech in which she appeared careful not to annoy leaders back home who have initiated reforms.

Don't get me wrong, I'm thrilled that the formerly crazy ass government of Burma has mellowed out a bit as is no longer quite as big an enemy to its own citizens as it has been for the past few decades. But I would also assert that a Congressional Gold Medal being awarded by a country that has effectively become a one-party corporatist state in which the government does not represent the interests of 99% of its citizens, and in which if you do not have access to many millions of dollars you have no hope of ever getting elected to Congress, is the absolute pinnacle of hypocrisy. It's also quite an irony that a dissident democracy activist is being honored in our nation's capitol not long after brutal police thugs were dispatched to forcibly evict peaceable Occupy protesters all around the country at the behest of the 1%-er assholes who have bought and paid for all of our major politicians.

Hmmm...given the above, you don't suppose that Congress might have an ulterior motive here, do you? Oh, you're such a cynic...say it isn't so:


The United States has been rolling back restrictions, in July opening Myanmar up to US investment despite Suu Kyi’s earlier unease about US firms doing business with the state-owned oil and gas company.

So THAT'S it...this farce isn't about democracy but instead coming up with the political cover we need to allow Burma to be subjected to the same economic imperialism as most of the rest of the planet. No doubt, plans for a new "free" trade agreement so that even more American jobs can be turned over to brand spanking new Burmese sweatshops, where the local workers will toil 12-hours-a-day for subsistence wages under brutal conditions with zero retirement and health care benefits, will soon follow. Don't believe it? Let former First Lady NAFTA tell you herself:


Suu Kyi, dressed in a red jacket with three small pink flowers in her hair, began her visit by meeting another of the world’s most prominent women, Secretary of State Hillary Clinton, who marveled at her political odyssey.

“It’s wonderful to see Suu Kyi back in Washington as a free and forceful leader of a country opening up to the world in ways that would have been difficult to imagine even recently,” Clinton said.

But Clinton warned that Myanmar still had “a lot of work” to do, including freeing remaining political prisoners and ending alleged military contacts with North Korea.

“The government and the opposition need to continue to work together to unite the country, heal the wounds of the past and carry the reforms forward,” said Clinton, who paid a landmark visit to Myanmar in December.

Just remember, folks. Wherever Hillary goes, your jobs are no doubt soon to follow. America: land of the bloody well fucked and home of the craven assholes who sell them out.


Bonus: "Once I had my heroes...Once I had my dreams...But all of that is changed now...They've turned things inside out...The truth is not that comfortable, no"