Call Those Who Offshore American Jobs What They Are: Traitors 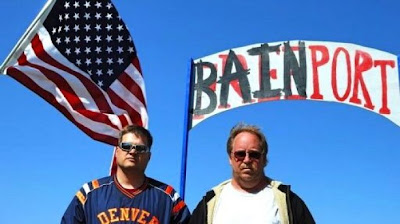 Poor old Willard. My hometown of Freeport, Illinois, just refuses to go away and leave Governor 47%-er alone as he continues his increasingly hopeless quest for the presidency. Yet another major story appeared this week about Bain Capital's decision to close down the local Sensata plant and ship the jobs off to China--all while forcing the plant's employees to train their Chinese replacements. But this time, the story featured a new twist:


Being told to train his replacement was humiliating and surreal, but Tom Gaulrapp said the worst part was when the plant’s US flag was taken down before the Chinese engineers arrived.

Gaulrapp decided it was time to take a stand against outsourcing and the man he blames for the loss of his job: Republican White House hopeful Mitt Romney, who founded the private equity firm that owns the Freeport, Illinois auto parts plant.

Romney’s ties to Bain Capital have burdened the Republican nominee’s hopes of winning the November 6 election as Democrats unfavorably paint him as a corporate raider who pioneered the outsourcing of US jobs to countries with lower labor costs.

Romney denies the charge, but his claim to be a man who could revive the economy and boost the prospects of American workers rings hollow here.

Gaulrapp thinks it would only take a phone call from the candidate who’s vowed to create 12 million jobs in the United States to save the 170 jobs at Sensata Technologies that are about to leave this already economically depressed town of 26,000.

“What we’d like is a miracle,” Gaulrapp, who has worked at the plant for 33 years, said with a sigh that acknowledged how unlikely it is that his wish will be granted.

“We’d like Mitt Romney to come to Freeport, see what this is doing to this community, and contact his friends that run Bain Capital and say ‘this is absolutely the wrong thing to do’ and save our jobs.”

Fat chance of that happening. So what was the company's justification for stripping so many long term employees of their livelihoods?


Sensata, which is majority-owned by Bain Capital, purchased the automotive sensors unit from Honeywell for $140 million in cash in January 2011.

With annual revenues of $130 million and valuable patents, the unit was a good buy. But with 75 percent of the revenue generated in Asia, it made sense to ship production to Sensata’s facilities in China, the Netherlands-based company said.

Sayer acknowledged that the decision to shift production to China is “an unfortunately event” for Freeport and said he understands why it could be “difficult” for the workers to train their replacements.

Goddamn, but the company spokesweasel is completely full of shit. Really? It's better to be "closer to your customers?" If that were really true, why does Walmart North America import all of the crap it sells from China? This isn't about location, it's about lowering labor costs, and the American workers cost too much. You're completely fucking them, so the LEAST you could do, asshole, is tell the fucking truth.

Oh, and what about that American flag bit anyway?


He has no idea why — or if — the US flag was removed before the Chinese engineers and technicians arrived.

“We didn’t request it. I can tell you that,” Sayer said, adding that the company has been leasing the facility from Honeywell and has no involvement in grounds maintenance.

Oh, right, it's just a fucking coincidence that the flag disappeared on the day the Chinese workers showed up. The fucking janitor must have been hungover that morning or something.

All right, folks, I am going to go ahead and put it bluntly. It's time to stop fucking around and call the people responsible for stripping away American factory jobs and sending them to the country that the war pigs at The Pentagon would call our worst potential enemy what they really are: traitors to America.

Now, my regular readers might scoff that I, who derides this country's elected "leaders" every chance I get, is writing a post appealing to patriotism. In clarification, I will say that it is not patriotism per say that I have a problem with, it is the way superficial appeals to patriotism are used to get average Americans to go along with being boned up the ass by sociopathic fuckheads like the ones who run Bain Capital. It is high time that patriotism instead be wielded as a weapon against these MBA assholes who have never worked a real job a day in their fucking lives.

That's not to say that I want to get all xenophobic and start blaming the Chinese. Fact is, I don''t blame them. They are merely taking what is being gladly given to them by greedy scumbags who are selling their country down the river in the interests of making a buck. If I were in their shoes I'd do the same damn thing. Sadly, the regular Chinese workers who get hired on at the Sensata plant once it is moved to their home country will likely get treated no better than their unfortunate counterparts at Foxconn. For that's where the world is headed: massive unemployment in the West, massive sweatshop production in the East and no one except a tiny elite enjoying any form of prosperity, security or leisure.

No, it isn't the Chinese who are the problem: it's the traitors. And by traitors I mean every fucking asshole (read: Willard Mitt Romney) who has ever been involved in offshoring American jobs as well as every fucking asshole (read: Bill Clinton, Barack Obama) who has ever been involved in pushing through the "free" trade agreements that allow American jobs to be offshored. It is only by thinking about them as they really are that we can stay focused on the fact that THEY are our real enemies and not our fellow workers who may be on strike trying desperately to hold onto to what they have. I have no hope that the average American will wake up to this basic realization before it is too late for all of us, but hey, somebody had to say it.


Bonus: "Deeds not words, you should have told the truth...you're a liar and a traitor and now we have the proof"