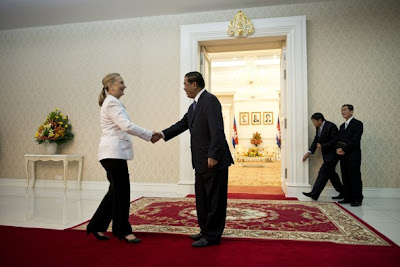 My recent visit to Cambodia rekindled my interest in beleaguered country (even if I did not personally get to witness much of its beleaguerment), and since I got home I've been reading a copy of Cambodia's Curse, a recently published history written by journalist Joel Brinkley. Through hundreds of interviews with Cambodian citizens and politicians as well as westerners who have recently worked in or served in country, Brinkley meticulously details how the Cambodia people have been repeatedly abused and sold out by their own corrupt government and venal national politicians even after the hideously evil Khmer Rouge movement passed into the dustbin of history.

The book's primary focus is on Cambodian Prime Minister Hun Sen (pictured above with Hillary Clinton), a true Machiavellian dictator who has effectively run the country since 1985. Sen was originally an officer in the army of the genocidal Khmer Rouge who defected to Vietnam about a year before the invasion that drove his previous patrons out of power. Installed as a communist Vietnamese puppet in 1985, Sen has somehow managed to survive the withdrawal of the Vietnamese army, the fall of the communist bloc and intractable opposition from anti-communists in the U.S. government to remain in power for more than a quarter of a century. Like most strongmen in charge of the world's poorest countries, Sen and his cronies have dedicated themselves to stealing everything that isn't tied down, including pocketing vast amounts of foreign aid money along with the proceeds from the illegal clear cutting of the country's few remaining hardwood forests. All the while, the vast majority of Cambodians suffer from abject poverty, malnutrition and among the highest rates of infant mortality in the world.

There are a couple of anecdotes in the book that struck me as being particularly relevant to those of us living in the west who have watched as our own governments have become gradually more corrupt and unaccountable to the citizenry. One involves Sen's habit of routinely having his thugs toss live grenades into opposition rallies and then having his police blame the opposition for the attacks claiming that they benefitted politically. The other is Sen's repeated promises to foreign aid donors to pass anti-corruption laws, promises he then conveniently forgets as soon as the aid money comes rolling in, which it always does. Both of these tactics are so ham-handed and obvious that a fifth grader should be able to see through them. And yet Sen's regime continues to do them repeatedly because, guess what, they succeed in achieving his ends.

I wrote in yesterday's post that one of the big mistakes made by many in the peak oil community in the wake of the 2008 oil price spike and subsequent market crash is assuming that governments will not do literally everything they can do to avoid a fast collapse. And while Americans might be tempted to smugly believe that their own government is too "civilized" to ever stoop to tactics like grenading its own citizens in order to maintain power, I would merely ask whether there is any real moral difference between that action and the drone missile campaigns, the assassination of American citizens without trial or the maintenance of a concentration camp in Guantanamo Bay. What is particularly odd is that I was able to purchase my copy of Cambodia's Curse for $8 in a market stall in Siem Reap, despite the book's rigorous lambasting of Sen. That tells me that just like in America, the Cambodian government believes people who actually read and know what is really going in the world are such a tiny isolated minority as to no longer pose a threat worthy of the expense of suppressing them.

To date, most of the actions governments have needed to take in response to the world wide financial crisis have been in the financial arena. There is no reason to expect, however, that more forceful tactics will not be employed as the long emergency drags on. The abuse of Occupy protesters by police around the country serves as a mere hint of what is likely to come in the future. Many in the peak oil community thought that the market crash of 2008 was beginning of the end, whereas I would humbly assert that the response to it was in fact the opening salvo of a dirty war against reality that will be going on for a very long time.


Bonus: "But I found out only two years ago that we don't live in a democracy"