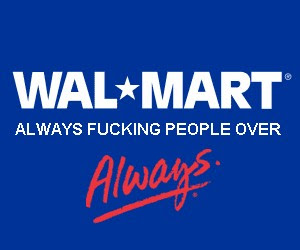 Hey, guess what? America's most predatory retailer, purveyor of mountains of cheap shit from China, scourge of the small businesses everywhere, creator of more ugly ass suburban blight than any other, turned 50 years old this week. So to help celebrate this monumental milestone on America's road to perdition, here is Gawker with a blistering rant from a very happy FORMER Walmart employee:


Well, I'm finally done... I am so glad I will never have to work that god forsaken third shift nightmare of a job at Wal Mart again. I just couldn't take it anymore...I just couldn't waste one more second of my life in that soulless corporate hellhole. There's only one way to go from now on and that's up. I've already been at the bottom of the shit pile...horrible hours, pathetic wages, idiotic ignorant knuckle dragging customers, and asshole incompetent managers. Gonna miss that 10 percent discount though haha

And every time I remember some new injustice perpetrated by this greedy unholy corporate behemoth Im gonna post it on Facebook until I purge its poison out of my soul..one year, eight months, two days and thirty two seconds of my life I can't get back working as a corporate whore for the devil LOL

Who in God's name expects people to work EVERY weekend and EVERY holiday because the managers are too damn lazy and uncaring to rotate the schedule..."Well we'll just make everybody on third shift work every weekend to eliminate the hassle of changing the schedule every week" Sad but true...stupid assholes

And you MUST work 12 hours on Black Friday..Which in the greedy corporate soulless world of Wal Mart starts THURSDAY Thanksgiving DAY at 7 p.m. Screw your families and holiday dinner, people..there's MONEY to make.

Oh but Wal mart employees have off Christmas Day"...oh excuse me I didn't know Christmas Day ended at 10 p.m.

How do they plan where they put there stores? It probably goes something like this:
Let's take a crew of desperate people looking for work in a shitty economy in a depressed area, build a big boxy ugly store and sell cheap merchandise manufactured in China and from other poor nations with a child labor force and sell the crap for cheaper than other stores because we dont' pay our employees a livable wage or adequate benefits and they're pretty much disposable if they complain.

And we don't have time to train them properly and we don't have enough people to stock the crap we sell... so simple things like ROTATING STOCK and disposing of damaged or tainted merchandise so people don't get sick goes by the wayside. If our customers get expired produce and meat and dairy products or broken merchandise and stuff that has had chemicals leaked on them...well BUYER BEWARE!!

And if any of our employees gets injured we bully them into not filing a claim and if they do we fire them.

And if they reports unsafe work practices to OSHA we lie our asses off when the investigators show up and pretend that we're "painting the bulletin boards" so we don't have to post the OSHA report for all employees to see as we are required to do so.

What our customers don't know would curdle their blood...pesticides stored on top of pet food, expired baby formula..mice feces in the bakery along with chewed bags of bread...mice with a carnivorous fondness for beef jerky, leaving their poop behind in the display box after chewing through the bags, and meanwhile customers are buying beef jerky from the SAME BOX!!

And by the way if you are buying HOLIDAY candy hate to tell you that's been sitting in our dirty warehouse/backroom since summer for MANY months! ENJOY!!! The mice sure did... Just dust off the feces, get rid of the chewed bags and sell them suckers!!!

If you're ever in our store when the late night bi-weekly cleaning of the meat department cases takes place you'll learn first hand what a rotting corpse probably smells like..it should be done more often but no one wants to do it and the managers don't really give a shit to enforce it...this filthy cesspole catch basin of liquid blood scum is lurking about six inches below that package of hamburger meat you're about to buy, Mr and Mrs. Customer. Bon Appetit!!

Incompetence and indifference trickles down from the top management and infects the average worker..for example the person who orders paper towels was on vacation one week so no one thought to order paper towels for the bathrooms...you know, the same bathrooms the employees, the people who handle the FOOD, use too.

So employees wash their hands and have to dry them on their dirty work clothes!!!!!! This went on at our store for a week until some upper management asshole FINALLY gave permission for some lower manger to pull paper towels off the shelves and stock the bathrooms. The issue at stake: Wal Mart would be LOSING money by doing that so they balked at it until workers complained.

Wal Mart is all about the almighty dollar, screw the customers and double screw the employees.

I like for example how employees are instructed FIRST to punch in a code if they are being are robbed which sends a call to the police. In fact, uou have to do it in order for the cash drawer to open...gee THAT won't make the guy with a gun in my face at all suspicious or jumpy when he seems me punching a bunch of buttons.

I don't know what your local store is like but where I worked, it was a mix of middle aged people (quite a few women) who have lost their jobs in the recession and took the job when this place opened because there are no real good jobs to be found in [my area], where the poverty rate is high; there were also young people many of them in college or right out of college who couldn't find work elsewhere.

Yeah we had our share of a "lowlife flunkies" but most of them are the customers who make our lives even more hellish. The people I worked with were mostly poor to middle class people who work hard for very little pay and a lot of abuse.

When a coworker left Wal Mart, it felt to me like it must feel when you're prison, when a longtime fellow inmate is released. You feel happy for them but you wish it was you.

And now, a little reminder of WHY America is going down the tubes, here is a reader comment from some asshole who call himself/herself DoctorOfStyle DEFENDING Walmart:


Boo fucking hoo. At least it is a job. I guess we should just raise taxes on the "rich" a little more so you can sit on your can. Maybe import a few more Mexicans to do the work you are too good to do.