Look Who's Crying About Sequestration 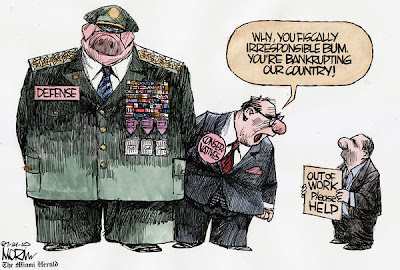 I gather that most people around the country are too busy just trying to make ends meet and keep their heads above water to be paying much attention to the ticking time bomb our fearless "leaders" set for themselves during last year's debt ceiling fight. That ticking time bomb is called sequestration, and it is set to explode on the second day of the coming new year as part of a much larger federal budgetary "Armageddon" known as "the fiscal cliff," which also includes the expiration of Bush tax cuts, the end of Obama's insane payroll tax "holiday" and the need to raise the debt ceiling yet again. Given that there is ZERO political will to deal with these thorny issues prior to election day, it means that all of them will come to a head on the watch of a lame duck Congress (and perhaps president) between November 6th and the end of the year.

I'll no doubt be writing a lot about this gigantic shit sandwich in future posts, but for the moment I want to focus on the sequestration aspect of it since it is already on the lips of plenty of nervous bureaucrats and contractors in the DC area. So what does sequestration mean for them? Well, here is the "bible" of Inside-the-Beltway thinking itself, Government Executive magazine, with the answer:


At last week’s Excellence in Government Live event, attendees from across government packed rooms to hear budget experts, not typically the most popular brand of speakers, explicate the budget battle ensuing on the Hill. The consensus was not optimistic.

Sequestration, automatic budget reduction, was placed into the 2011 Budget Control Act as a threat to spur the budget ‘super committee’ into action. The super committee failed to reach a consensus, and so budget cuts between 8.5 and 10 percent for FY2013 are slated for January 2, 2013 should Congress fail to pass a budget resolution in time.

Agencies, however, have just nine months to achieve the cuts as FY2013 begins in October. The effective monthly rate is then between 11.3 and 13.3 percent. Sequestration is not a one off occurrence, either. It is a ten year budget reduction, essentially freezing agency accounts for the next decade.

In other words, rather than carefully planning how they might reduce federal spending, the idiots in charge have set things up so that every federal agency is going to get whacked with a budgetary meat cleaver. If this actually is allowed to happen, it will cause unprecedented chaos in Washington.

Not that I expect anyone who will not be directly affected to give a shit. Even though sequestration is going to have dire effects on many people whom I know personally and indeed Virginia actually receives more military spending per capita than any other state, I acknowledge that it is probably the only way the federal government is EVER going to start to reduce its insane levels of deficit spending short of default and a total collapse of the dollar. So I say, enough fucking around. Bring it on, already.

One would also think given the above that sequestration would be a political conservative's wet dream. After all, didn't that slimy asshole Grover Norquist say he wanted to "drown the federal government in the bathtub?" Sequestration may not be a drowning, but if it happens the patient IS going to start looking a little peaked.

Well as it so happens (surprise! surprise!), some conservatives are whining like little titty babies about sequestration. And who might that include? Why, none other than the Heritage Foundation for starters:


Considering the recent violence directed at the U.S. in the Middle East and the looming January 2 deadline for sequestration, it would be imprudent for Congress to remain idle. Waiting to address the military’s budgetary concerns until it is politically easier or until a decision is forced by a direct conflict is irresponsible. This is especially true given the strained resources with which the armed forces are already operating around the world. Members of Congress need to act now to stop defense sequestration and support robust national security funding.

Sequestration refers to the automatic cuts in the federal government’s operations mandated by the Budget Control Act of 2011 (BCA). This legislation requires an automatic, across-the-board $1.2 trillion cut in federal spending. National security funding suffers the bulk of these cuts—roughly half a trillion dollars. The Department of Defense has already shrunk by roughly $800 billion through efficiencies measures in 2009 and the first portion of cuts from the BCA.

While the OMB report does not indicate which military capabilities will be reduced under sequestration, the House Armed Services Committee has made stark projections. The cuts will cause the smallest Navy fleet since before World War I, the smallest ground force since before World War II, and the smallest Air Force in its history. These reductions will hinder the U.S. military’s ability to perform its varied missions throughout the world on a daily basis.

What will these defense cuts mean for U.S. security and interests in the Middle East? The recent engagement in Libya provides some answers. The U.S. eventually had to take the lead in this conflict because European NATO forces were inadequate for certain missions, such as enforcing a no-fly zone. If NATO forces become engaged in a similar scenario with a more capable adversary, the U.S. may not be as confident in a leadership role.

The aging U.S. Air Force F-16s and Marine Corps Harriers that flew over Libya are set to be replaced by the fifth-generation F-35 Joint Strike Fighter (JSF). However, under the President’s fiscal year 2013 budget request, the nascent F-35 fleet will shrink by 179 aircraft over the next five years. Furthermore, sequestration could eliminate the entire fleet for the Marine Corps JSF variant. This has implications for American allies as well. The United Kingdom has staked its entire future fighter jet force on the Marine Corps variant, and allies such as Israel, Canada, and Japan also intend to buy the fighter.

The U.S. Navy maintains an important presence in the Mediterranean Sea, Persian Gulf, and Indian Ocean. Through this presence, regional maritime choke points such as the Strait of Hormuz, the Bosporus, the Dardanelles, and the Suez Canal remain open shipping lanes. If any of these vital shipping lanes were disrupted, there would be significant economic consequences. The Strait of Hormuz is particularly vulnerable given its extremely narrow passage and proximity to Iran.

The Navy’s presence would also be important if the U.S. were to engage in a conflict similar to the one in Libya. Aircraft carriers host a variety of critical air assets such as F-18 fighters, surveillance aircraft, and, in the future, the F-35. Each carrier hosts an air force rivaling that of most nations. However, one ship cannot be in two places at the same time. Under sequestration, the Navy will reduce its fleet of carriers from 11 to 10.

U.S. Special Operations Forces will also be affected. The President has regularly touted Special Forces as low-intensity tools for his foreign policy ends, exemplified by their successful strike on Osama bin Laden and deployments in Afghanistan, the Middle East, and North Africa for various other missions and training exercises with local forces. However, even if Special Forces retain robust funding, the cuts in conventional forces will hinder them. SEAL teams embark from Navy vessels, and reducing conventional manpower end strength also reduces the pool from which elite troops are selected. Furthermore, modernization accounts such as the V-22 will be used for irregular and unconventional missions.

Provide for the Common Defense

The ideal solution is for the Administration and Congress to solve the budget impasse today, as each additional day of delay makes it more difficult for defense suppliers and military leaders to plan ahead in a very risky world. If that cannot be done, then Congress should offset sequestration for just 2013 with spending cuts elsewhere. Then the new Congress could work with the President next year to solve the rest of the defense sequestration problem.

While the Obama Administration continues to sacrifice national security forces to achieve other goals, Congress should focus on its constitutional responsibility to provide for the common defense. Congress already has all the tools needed to agree on a real budget. Members need no new devices to do this but only the will.

Yep, that's right, these fucking assholes really do believe that maintaining a global military empire at the expense of bankrupting and ruining our economy is "providing for the common defense" even though, as I have pointed out repeatedly on this blog, there is no nation nor potential combination of nations that is even a remote conventional military threat to the United States. Once upon a time, way back in the dark ages of 1972, one of the two major party candidates for president actually promised that if elected he would reduce military spending by a whopping 40%. But this stupid fucking country turned its back on George McGovern in a big way and thus also on its last real chance to hold the military-industrial complex at bay before it started eating us from within like malignant tumor.

More disturbingly, if you combine this insane stance with the heartless, blame-the-poor rhetoric coming from the right in the presidential campaign, you get a pretty good idea of just how intellectually bankrupt mainstream conservatism has become. Apparently, they will not be satisfied until every job has been offshored, every rich fucker pays zero taxes and the federal government does NOTHING WHATSOEVER for its own citizens while going around blasting the shit out of dirty little foreigners all over the globe. What is even more laughable about this hysterical shrieking about the supposed damage to our national security is that their ideal dystopian society as I just described it would hardly be worth defending at all.

So as it turns out, sequestration is actually not a mainstream conservative's wet dream but instead that of a passionate antiwar zealot like me. Like I said, bring it the fuck on already.


Bonus: Unfortunately, they will undoubtedly come to some bipartisan "compromise" and this will be yet another dream I'll never see