There is No Hope, Only Denial 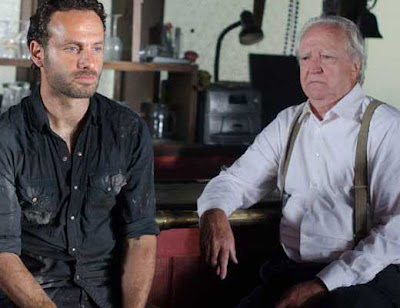 There is a memorable scene in the climactic episode of the first season of the otherwise erratic television series, The Walking Dead, in which the last surviving doctor at the Center for Disease Control blurts out to Deputy Sheriff Rick Grimes and his ragtag band of zombie apocalypse survivors, "The world runs on fossil fuels...I mean how stupid is that?" right before the generators at the CDC facility run out of gas, extinguishing forever the last hope that a cure might be found for the plague that has turned humanity into mindless, flesh eating corpses. It's just one scene in the series that has resonance in the real world as we are living in it today. Another is in the second season when God-fearing farmer Herschel Greene has a drunken epiphany and confesses to Grimes that he has lost all hope for the future.

For 16 months now I have been writing this blog and attempting to document what I see as the hopeless predicament faced by our industrialized society and America in particular as we confront the multiple scourges of peak oil, resource depletion, overpopulation, climate change and environmental degradation. One thing you may have noticed if you have been a regular reader of this blog is a distinct lack of proffered solutions to our collective predicament. Quite simply, that is because I do not have any solutions, or at least not any that I believe have any chance of being accepted by enough people to matter. Beyond making adjustments in your own life to ensure that you don't fall between the cracks during this "zombie economy" period in which the lights still come on at night, I am firmly of the belief that there is not a whole lot you, me or any other single individual can do. We are merely passengers on this runaway train, and the engine room is as off limits to us as the dark side of the moon.

The impending end of our modern way of life is unlikely to come tomorrow, next week, next month, next year or even within the next few years, but the long term trends could not be more obvious or unavoidable. And while at this late date it might still be theoretically possible with the remaining reserves of fossil fuels available for mankind to manage a powering down in such a way that avoids a world wide calamity and mass die off, that would assume a collective wisdom and willingness to participate in shared sacrifice that sadly our species just does not seem to possess. As long as there are sociopaths who strive for dominance--and they seem to have taken over a vast majority of the leadership positions in the world today--there is no chance of awakening the mass consciousness before it is too late.

Back in June I made the decision to take a break from blogging and then reduce the number of posts here at the Downward Spiral. My motivation was in part so I could do a little more living and spend a bit less time tied to computer keyboard. That part of the plan has actually worked out fairly well. My other reason for doing so was that I had hoped that reducing my relentless obsession with the future might brighten my outlook a bit. That part hasn't been nearly so successful. Even though my thinking has evolved from those dark days of the fall of 2008, and I no longer see a fast collapse of civilization as being a likely outcome, my hopes that by pulling back a bit I might find reasons to be at least a little bit more optimistic about the eventual endgame have not borne fruit.

The same old question that has been nagging me for the past four years still remains: just how quickly are things going to devolve? Well, if I knew the correct answer, I could probably make enough money to ensure that I would be one of the lucky few around the middle of the 21st century who still manage to die of old age. It would seem, for example, that a U.S. presidential campaign could not possibly become more trivial and devoid of substance than the sham we are going through right now. That would seem to indicate that by 2016, a full eight years after America's economy became irreparably broken, awareness that the old paradigm of economic growth is dead should be widespread enough that the powers that be will be forced to snuff out the remaining facade of representative democracy in order to maintain their control. But then again, four years ago I would have said the same thing about the elections of 2012.

The fact is that no one knows how long we have left before things really start to unravel, and anyone who claims they do is completely full of shit. I've said this before, but author Jim Kunstler was very wise to describe what we are going through as a LONG emergency. Nevertheless, getting back to the main theme of this post, that does NOT mean that I see any possibility of redemption when 99% of the population (the REAL 99%) remain utterly oblivious and in deep denial about what's coming (and even the 1% who do know continually argue and fight amongst themselves as to what can or should be done). Thanks to the desire of our "leaders" to keep the game going as long as possible, we'll likely keep on bumbling along until one day we can't any longer. And that is the most definitive prediction about the future that I am willing to make.


Bonus: "This is what takes us down...This is our extinction event"