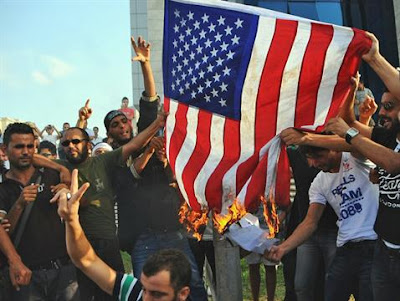 The recent attack on the U.S. Consulate in Benghazi, Libya, and the killing of Ambassador Christopher Stevens was just the highlight of a series of escalating violent demonstrations taking place outside U.S. embassies all across the Middle East and South Asia this past week. The attacks reportedly even spread all the way to the consulate in Channai, India, a country that is supposed to be a steadfast U.S. ally. Clearly, something is afoot in the world that goes far beyond mere popular outrage over an obscure, cheaply made anti-Muslim cinematic diatribe. Those condemning idiot pastor Terry Jones and the producer of the inflammatory low budget film are missing the point, for it is entirely likely that if it wasn’t this movie inflaming passions among the world’s Muslims it would probably be something else. The Jones-linked film merely represents the spark that set off an explosion that has been building up for a very long time.

In order to really understand what is going on in the Middle East right now, one must do what Americans are absolutely loathe to ever do—namely put themselves in the shoes of the average denizen of Libya, Egypt, Iraq, Afghanistan, Yemen or Pakistan. Eleven years ago, a tiny Muslim splinter group nestled in the caves of eastern Afghanistan pulled off a spectacular (and spectacularly lucky) terrorist attack on American soil in part because the administration of George W. Bush was (at best) completely asleep at the switch, and ever since that time the U.S. and its NATO allies have been engaged in a systematic campaign of collective punishment against the population of numerous Muslim countries while continuing to support brutal authoritarian dictatorships from Cairo to Riyadh.

For more than a decade, Muslims have had to stand by largely helpless while many of their fellow religionists, most guilty of nothing worse than residing at the wrong place at the wrong time, have been slaughtered as America has taken its chunk of flesh in retaliation for 9/11. And while it is true that many of the killings that have occurred in Iraq and Afghanistan have been at the hands of other Muslims, it was the American invasion and occupation of those two unfortunate countries that destabilized them and created the conditions for the massive amounts of violence and (in the case of Iraq) even ethnic cleansing that have been occurring there.

Looking back over this sad, sorry recent history, the wonder isn’t that our embassies are being attacked but that all this didn’t start happening sooner. It’s like all of the green-on-blue shootings that have been going on in Afghanistan lately in which our so-called military “leaders” are shocked, SHOCKED to discover that after more than a decade of occupation even supposedly friendly Afghanis would like to see us gone and are willing take their chances against the Taliban, who may be brutal thugs but at least look, dress, speak and worship as they do and don’t randomly drop drone missiles on assorted wedding parties.

It is particularly telling that the worst violence to date has erupted in Egypt, Tunisia and Libya, three countries where the U.S. either stood aside while their longtime dictators fell or gave them an active shove. While abandoning the pro-Western Mubarak in Egypt and Ben Ali in Tunisia probably would not have been the U.S. government’s preferred choice of action, we were at least smart enough to recognize that the Arab Spring had gathered far too much momentum to smother. We were just hoping to contain it short of the Arabian Peninsula, and for a while it looked like we might have succeeded without drawing too much popular ire upon ourselves.

Not anymore. The irony of all this is that it is happening on the watch of President Hopey-Changey, who has tried so hard in recent years to play the “good cop” representing America’s brutal foreign policies to Bush and Cheney’s “bad cop.” Obama has just learned that there is an absolute limit to how much sunshine you can blow up the skirts of a certain group of people to try and deflect attention from your bad acts against them before they get fed up and tell you to go fuck yourself. One could make a comparison of how decades of American support for the vile Shah of Iran blew up on the watch of President Jimmy Carter, but Carter at least did more than just pay lip service to respecting human rights.

So where is all of this headed? Time will tell, of course, but we should not underestimate just how ominous these developments are for the continuation of American hegemony in the Middle East and South Asia. Obama’s political advisors must be sweating bullets right now as short of a major market meltdown before election day, which with Benny and the InkJets just announcing the latest round of quantitative easing seems highly unlikely, the one “October surprise” that could unseat the incumbent is the eruption of region-wide anti-American conflagration in the middle of the planet’s most important oil fields. In fact, this whole mess seems to have real “Tet Offensive Potential,” in that it could be the “unexpected” foreign policy event that ends up driving a warmongering Democratic president from power (to also be replaced by a Republican who may be even worse, but that, as they say, is a whole ‘nother story). Obama, it seems, is about to discover that it takes more than just a lot of fancy-but-empty rhetoric and the symbolism of being the first black president to keep blinding people to the unpleasant realities of America’s seemingly endless imperial wars.


Bonus: "I shall not seek...and I will not accept...the nomination of my party for another term as your president"