There Are No Superheroes, Just a Decadent and Depraved Culture 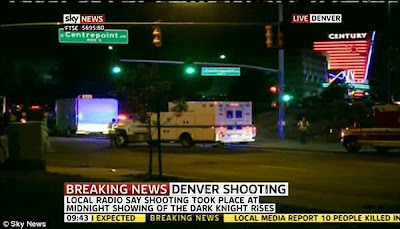 Mass shootings have become so common in America in recent years that most of the time they no longer even generate screaming national headlines—instead often fading into the media background noise along with all of the other horrible shit happening these days. If you are an aspiring mass shooter, you’ve got to come up with something truly creative to really get noticed. Show us something we haven’t seen before, you know, like attacking a crowded theater during the midnight premiere of the latest $200 million mindless comic book movie.

Today’s mass shooting tragedy in Aurora, Colorado—incidentally located not too far from the scene of the horrific 1999 slaughter at Columbine High School—was spectacular enough to get our collective attention. Once again, grisly images of bloodied bodies, including children, being littered across a typical suburban landscape have been seared upon our collective conscience, momentarily shaking us out of our media-induced stupor, if only long enough to merely condemn the killer as an asocial monster. And once again, as soon as the initial shock has faded we will collectively go right back to sleep without asking any of the larger questions about just why it is that so many of our fellow citizens “suddenly” turn rabid and try to kill as many others possible.

No doubt that in the aftermath of the shootings, before the blood and gore has even been scrubbed from the crime scene and the bodies of the dead buried in their graves, we will hear the same tired old bromides from both sides of the political spectrum. Liberals will insinuate that we need more gun control, though few Democratic office holders will say so too openly out of fear of offending the gun lobby. Many conservatives, meanwhile, will trot out the even more ridiculous line that the shootings just show that everyone should be packing heat and ready to defend themselves, even though most people are so incompetent that if all of the patrons in that theater had opened fire at once they would likely ALL have ended up dead in the resulting melee.

I’m sorry to disappoint the members of my former political tribe, but easy access to guns really isn’t the problem. Owing to its frontier heritage, America has always been a gun culture, and yet the epidemic of mass shootings is a relatively recent phenomenon. What’s changed is not the available weaponry but a the emergence of a decadent and depraved culture that has left countless millions of people alienated and disaffected with little hope that their shitty lives will ever get any better.

After World War Two, thanks greatly to the rise of television, America became the perfect consumer society just as it was also building soulless artificial suburban communities farther and farther from central cities. Whereas previously most people never strayed more than handful of miles from the place of their birth, meaning that they were always surrounded by a strong support network of friends and family members, suddenly in the pursuit of ever higher paying jobs in order to be able to afford the “good life” being sold to them on their television screens it became the norm to move hundreds or even thousands of miles away to places where they did not know anybody.

Instead of living in a modest homestead with maybe three generations under the same roof, they now occupy oversized McMansions on leafy cul-de-sacs where they barely even know the names of any of their neighbors. Burdened by ever higher levels of debt as they try to keep up with the Joneses despite stagnating salaries, they work ever longer hours with ever less vacation time to try to keep from falling off of a gigantic economic treadmill that seems to move a little bit faster every year.

Rather than having one parent stay home to raise the children, both have to work to afford their expensive lifestyles, meaning that the children get dumped off to day care, often before they are even old enough to walk. When the kids are old enough, instead of being sent to a small local schoolhouse they instead find themselves shipped every morning to gigantic education warehouses where the more socially awkward among them are relentlessly bullied by their peers. And when the kids do finally get to college they find themselves being buried under a gigantic mount of student loan debt before they even have a chance to get started in life. Oh, and just for shits and giggles (and Hollywood's profit margin) we'll make it so much of our popular culture consists of mindlessly hyperviolent movies, video games and teevee shows like The Dark Knight Rises, and get people so amped up to see them that they will stupidly rush out like lemmings to wait in long lines at the ridiculous hour of midnight to see the latest spectacle that will be available in their homes on Netflix within six months.

And now, in this age of permanent economic contraction, having completely bought in to an “American way of life” that has been sold to them relentlessly ever since they were little children, people are staring slackjawed as all of it is slowly being taken away from them by a greedy and predatory elite who have always felt that the rise of the middle class was only made possible in the first place by stealing what was rightfully theirs. At this point, the wonder is not that there are those who go off in a mindless rage and begin randomly killing everyone around them, but that it doesn’t actually happen more often.


Bonus: "Keep everyone afraid, and then they'll consume"