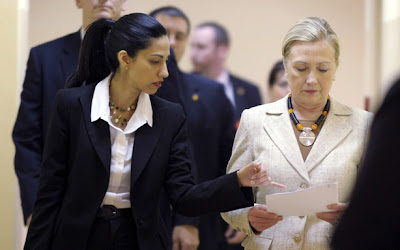 Poor Michelle Bachmann. She REALLY doesn't understand the way the world works. Because, you see, Mooslim-bashing (and gay-bashing, and librul-baching, and feminazi-bashing, and athiest-bashing) is perfectly acceptable as a tactic for scaring up votes and keeping the little people divided against each other if you are a wingnut Republican. You've just got to be sure that the Mooslim you are bashing isn't part of the in crowd.

Now even that tanned clown John Boehner and political hatchet man Ed Rollins are getting in on the act, ganging up on Bachmann for her recent two-bit McCarthyite antics. Here is Atlantic Wire with the details:


Speaker of the House John Boehner has become the latest high-profile Republican to denounce Michele Bachmann's "pretty dangerous" accusations that Huma Abedin, Hillary Clinton's deputy chief of staff and Anthony Weiner's wife, has ties to the Muslim Brotherhood. "From everything that I do know of [Abedin], she has a sterling character and I think accusations like this being thrown around are pretty dangerous," Boehner told reporters during his briefing today. (There's that word again, hmmm ... sterling) As Senator John McCain did yesterday, Boehner is doing his part in taking down accusations put forth by Rep. Michele Bachmann and other conservative congresspersons which allege that Abedin, among others working in the U.S. government, have ties to the Muslim Brotherhood. Bachmann and Rep. Trent Franks (R-Arizona), Louie Gohmert (R-Texas), Thomas Rooney (R-Fla.) and Lynn Westmoreland (R-Ga.) put those accusations in letters which were sent to five federal agencies, reports The Huffington Post's Amanda Terkel and Jennifer Bendery.

Boehner said he hadn't yet seen the letters, according to Politico, but his admonishment of Bachmann's crew is notable in that he joins the ranks of high profile Republicans-- denouncing the "dangerous" accusations. Since McCain's fiery defense yesterday, senators like Florida's Marco Rubio and Massachusetts' Scott Brown have voiced their displeasure with Bachmann, but the most scathing seems to be Bachmann's former campaign chairman Ed Rollins, who has come out with a "Shame on You" op-ed on Fox News' s website on Wednesday. Here's Rollins's parting shot:

As a member of Congress, with a seat on the House Intelligence Committee, Mrs. Bachmann you know better. Shame on you, Michele! You should stand on the floor of the House and apologize to Huma Abedin and to Secretary Clinton and to the millions of hard working, loyal, Muslim Americans for your wild and unsubstantiated charges. As a devoted Christian, you need to ask forgiveness for this grievous lack of judgment and reckless behavior.

Gee, the whole spectacle of the right wing eating its own to protect poor Huma is almost enough to bring a tear to a good, diversity-loving liberal's eye. I mean, she is the very embodiment of the American Dream: daughter of immigrants, educated in the finest schools and has become very successful based upon her talents and work ethic. Heck, she's even a Muslim who married someone JEWISH. She's a wine-sipping, brie-eating, NPR-listening, Prius-driving, Daily Show-watcher's wet dream. You just HAVE to admire her, am I right?

Let's examine for a moment who Huma Abedin is. First of all, she is a prominent Congressman's wife, and even though that Congressman had to resign his seat over a sex scandal, he's still part of the exclusive club of business, political, academic and media "leaders" who run this country on behalf the billionaire elites. According to Wikipedia, Huma herself first began working as an intern for Hillary Clinton in 1996 when the latter was First Lady. She rode Clinton coat tails, first as a Senate staffer and now as the Deputy Chief of Staff to the Secretary of State.

That means Huma has been with her boss the whole time while the latter voted to authorize the Iraq War, was a consistant supporter of the Iraq War while in the Senate, and then was the Obama administration's most passionate advocate for the Afghanistan surge after she became Secretary of State. Yet if Huma has had any qualms whatsoever about her boss's consistent belligerency towards her fellow Muslims, she has kept it well hidden. So well, in fact, that (again, according to Wikipedia), Hillary Clinton said about Huma on the eve of her wedding to Anthony Weiner: "I only have one daughter. But if I had a second daughter, it would [be] Huma."

Huma Abedin is in fact a perfect tool of the empire. As a minority female, she is the Democratic Condoleeza Rice, a useful idiot that even the likes of wrinkled up old warmonger John McCain and the blithering John Boehner can hide behind when they try to convince people that America really is all about diversity and not run by a tiny cabal of rich, evil old white fuckers who rule the world with an iron fist. The agenda here should be very apparent to anyone who is paying attention. As I've said repeatedly on this blog, whenever you see Republicans and Democrats agreeing about something, THAT is when you should keep a tight hold on your wallet.

Though she is far too stupid to ever realize it, Michelle Bachmann has now been shown her real place in the hierarchy of the American elites. She may have thought she was a true insider, but what she didn't realize is that she is instead another Rod Blagojevich, a sideshow clown whose batshit insane antics merely serve as a holographic distraction for the idiot masses. The reactions of McCain, Rollins, Boehner and other conservatives to Bachmann's over-the-line demagoguery against Huma were a shot across the bow, and if she persists in wandering off the reservation of the elite consensus, she might just find herself sharing a fate similar to that of the original Tail Gunner Joe.


Bonus: I'll bet Passover in the Weiner household was never anything like this