Ignoramus Americans Like the Supreme Court Less, Which Means Nothing 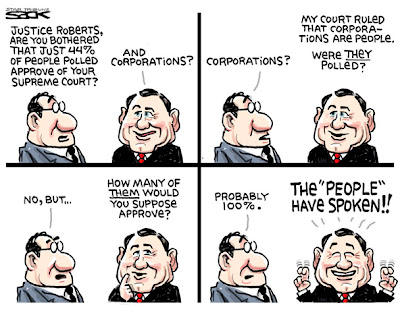 Once in awhile, I run into a piece on a mainstream website that perfectly sums up my position on a particular issue. So without further ado, here is Hamilton Nolan from Gawker:

The average American cannot tell you how many justices are on the Supreme Court, much less intelligently interpret the vagaries of Consitutional law and accurately assess how well it is being applied, in a philosophically coherent manner. Most Americans get the bulk of their education about the legal system from the popular Fox television series Cops.

Sure, there may be a vague—and accurate—public sense that the Supreme Court is dangerously politicized for such an unaccountable body. But the fact that the latest high-profile ruling featured a justice going against his party's preference should be an encouraging sign for anyone with that concern. The fact that public opinion simply marched in lockstep with the yammerings of cable news pundits makes it all the more clear that asking the average American about the Supreme Court is as worthwhile as asking a two-year-old how to pick up that hot girl at the bar: sure, they'll you something, but it won't be worth a shit.

I suppose the members of the Supreme Court can simply pose next to a popular professional athlete when they're ready for their approval numbers to rise again.