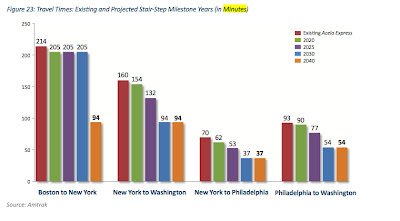 I said last month that one of the main reasons I was going to reduce my blogging was that I was getting sick and tired of paying so much attention to the “yadda, yadda” of our delusional and largely meaningless national discourse. Today, however, I came across yet another example of the yadda, yadda that was SO delusional that I just had to make a comment on it. I’ll let Talking Points Memo tell you the details:

The proposed high-speed rail line would travel at top speeds of 220 miles-per-hour in some sections and be able to deliver passengers from Washington, D.C. to Boston in a little over 3 hours.

The new Amtrak plan included the following chart showing the estimated time saved as construction on the new plan proceeds over the next 28 years.

Reading that, the very first thing that leapt to mind was to wonder whether, given that they have to be aware that the U.S. is already nearly $16 trillion in debt and that any form of mass transportation project faces determined institutional opposition from a Republican Party that considers it to be “socialist,” the Amtrak executives who announced this proposal haven’t completely lost their marbles. The proposal itself is a big enough fantasy, but then they had to go ahead and make it even more out in space:


But the plan proposes that Amtrak spend the next 13 years making improvements and upgrades to the 457 miles of current rail infrastructure in the Northeast Corridor, which stretches from Washington, D.C. to Boston, before laying down the new track that would be necessary for a high speed rail line.

In fact, Amtrak’s detailed outline, titled “The Amtrak Vision for the Northeast Corridor: 2012 Update Report,” is itself an updated and consolidated version of two other rail plans released by the corporation back in 2010, one focused on improving existing infrastructure and the other onhigh-speed rail, which Amtrak at that time estimated would cost $117.5 billion.

So, Amtrak expects to spend thirteen years making “improvements” before it even STARTS construction? And worse yet, the proposed cost of the project has already ballooned by nearly one-third in just the past two years alone? Pardon me for asking, but what exactly are they smoking over there? I just hope they aren’t sharing it with the train operators.

Just when I thought Amtrak had gone completely off the rails, to use yet another in my long line of unfortunate metaphors, they did at least somewhat acknowledge reality:


Still, Amtrak noted that “public sector leadership and funding is essential during the early years.”

In other words, the odds of this plan ever being approved are somewhere between nada and a snowball’s chance in hell.