Are We SURE the Obama Campaign Didn't Pay for that Idaho Billboard? 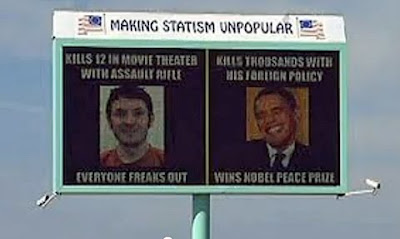 Now THAT is a beautiful bit of trolling. I have no idea who or what the Ralph Smeed Foundation is, in fact like most people I had never heard of the organization before they generated national headlines and yet another stupid media controversy by paying for the billboard pictured above. Nevertheless, whoever they are they did such a masterful job of once again getting idiot liberals and progressives to misdirect their ire that it made me wonder (and only half in jest) if the Obama campaign wasn't secretly behind the whole thing.

Because here is the question I have for the members of my former political tribe who are frothing at the mouth about this latest "outrage": what exactly are you upset about? Yes, the message is crass and insensitive coming so soon after the recent Aurora shootings. But that doesn't mean it isn't fundamentally correct. Putting aside the "in your face" nature of the billboard, what it is really saying is that Americans only get upset when it is other Americans who are killed for no good reason by a marauding sociopath. Shoot up innocent movie theater patrons in suburban Denver = national outrage. Drop a drone missile on an innocent wedding party in Afghanistan or Pakistan = "(Yawn) Hey, honey, what time is American Idol on, anyway?"

The reaction to this story on liberal op-ed website Think Progress was particularly galling. Check out some of the comments:


Scott Merrick · Top Commenter · Vancouver, British Columbia
Proving yet again that there is no bigger liar than a Republican/right winger. They KNOW Bush/Cheney started that war, as well as Iraq (which they conveniently do not mention in this revolting billboard), so not only are they dishonest, their pathological hatred is also fully on display.

Margie Robinson · Top Commenter · University of Georgia
Thanks for this, Scott, because it's 100% true: "Proving yet again that there is no bigger liar than a Republican/right winger. They KNOW Bush/Cheney started that war, as well as Iraq (which they conveniently do not mention in this revolting billboard), so not only are they dishonest, their pathological hatred is also fully on display."

Mark Duwe · Top Commenter · Indiana University – Purdue University Indianapolis
This nutjob could have donated the money he spent on this billboard to the Aurora Victim's Fund, if he really wanted to do something positive, but clearly, he doesn't.
(Bill's note: because paying for an advertising campaign advocating the end of an insane war isn't doing anything "positive" at all)

Anna Soull · Top Commenter · Toronto, Ontario
I have never witnessed the citizens of the USA attack a President in such a demeaning, hateful way as I have witnessed their public disrespect of President Obama. In previous decades any such deep, personal, slanderous attacks against the President of the country would have resulted in criminal charges against the culprits. I wish that Republicans would actually use some sort of political argument in their race for the Presidency rather than a personal attack on the man who is trying to steady the sinking ship of a country he got for his Presidency.
(Bill's note: Yep, Anna, and I'm sure you never referred to Bush as a war criminal. And if you didn't, you should have)

Rob Willhelm · Top Commenter
My concern is not with the sign itself but I definitely concern myself with the millions of supposed "Americans" who believe this crap, complemented by their total contempt for the fair and open democratic processes that finds Obama as the President of the United States, thus representing the greatest threat to my beloved country.

Scott Douglass · Top Commenter
I somehow don't think the people in Aurora "volunteered" for what they got. This person is an opportunist looking for their 15 minutes of fame. With any luck, the sign will fall on him as he's standing there admiring his 'handy-work'.
(Bill's note: notice how this idiot is only thinking of American soldiers and has no concern whatsoever for the civilian casualties of Obama's wars?)

Jackie Rawlings · Top Commenter
This is just one of the many examples of how insane our country has become with the current insane Law Makers and their King Mitt.
(Bill's note: yep, Jackie, this country is insane all right...and if you support Obama depite his war crimes, you are every bit as much of the problem as the conservatives you claim to loathe)

Aaron Keith Fewell · University of Louisville
This is so disheartening. While I'm a Democrat, I like to think I can look at things objectively and I work to see where people are coming from with their logic. But there is a growing faction of "movement conservatives" who have no logic...their strategy is simple, win on hatred, play on people's weaknesses. With each year, it becomes more outlandish. There was McCain heavily hinting at Obama as a terrorist at a rally and then he seemed shocked when he asked "Who is the real Barack Obama" and one of his mindless followers screamed "A terrorist". You can't practice the strategy of hatred and encourage it and then wash your hands of its effects.

Robin Potter
This is outrageous. I do not agree with the war, but come on, Obama did not start this war. I believe he is trying to end it and although, I am very sad about any deaths( American AND Afghans AND Iraqi"s) but I hardly see that we can lay this at THIS presidents feet.
(Bill's note: holy shit, nearly four years and one huge troop surge later, Afghanistan is STILL Bush's war. The cognitive dissonance is strong with this one)

Margaret Ann Williams · Works at The Dow Chemical Company
this is about as absurd as I've seen, such a shame that they would spend money to advertise such ignorance.
(Bill's note: yeah, and it's also a goddamn shame that the Guantanamo Gulag is still open despite the campaign promises of that lying sack of shit in the White House)

And so it continues on in this vein for nearly 100 more grueling comments. I didn't even have to selectively choose among them to make my point here. Sadly, the Ralph Smeed Foundation could not have done a better job of getting the delusional Obamabots fired up, and thereby more likely to go to the polls and vote for President Sellout again this November, thus helping to legitimize President Hopey-Changey's aggressively warmongering foreign policies, if that had been their intention all along.

There was a time in this sad, sorry ass country about 45 years ago when the American left brought down a Democratic president for waging aggressive war and slaughtering innocents abroad. ("Hey, hey, LBJ, how many kids did you kill today?" Remember THAT one, fuckers? What...because it isn't YOUR ass on the line anymore it no longer matters? Is THAT it?) And thus has the American left has been reduced to reflexively supporting a President who does exactly the same thing because, hey, you know, at least he isn't George Bush, Dick Cheney or Mitt Romney.


Bonus: "Your flag decal won't get you into heaven anymore...they're already overcrowded from your dirty little war"