This is Why I'm Not a Libertarian... 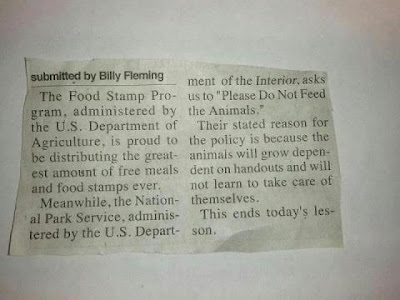 ...because then I might be stupid, blind or ideologically rigid enough to write the bit of "wisdom" contained in the op-ed piece above. That image has apparently been bouncing around recently on the libertarian websites, and the several comments I could stomach reading seemed to view it with much enthusiasm. Putting aside for a moment the sheer lack of empathy or even basic human decency shown by the writer, he also seems to have little understanding of who the real welfare queens are in America today.

Let me put this in very simple terms so that even the most thickheaded Randian troglodyte like Billy Fleming could understand it: the real purpose of ALL government welfare programs in this country is to enrich corporate America.

I'll pause for a moment so the libertarians can let out their WHARRGARBL.

Okay, now I'm back and ready to explain my rather incendiary assertion. Let's start with the food stamp program, since it in particular seems to vex poor ol' Billy Fleming. The average monthly food stamp benefit per person for those unfortunate enough to be on the program is the princely sum of $133 a month. Ever tried to limit your monthly food budget to that amount? I haven't, but I can't imagine it would be a picnic, to use an unfortunate metaphor.

Stretching that thin dollar out to cover the whole month pretty much guarantees that the recipient will be forced to buy a lot of cheap, highly processed foods of low nutritional value. Fresh fruits and vegetables are expensive, Kraft Mac&Cheese is cheap. When you are living day to day hoping not to go hungry before the next monthly stipend arrives, you don't have the luxury of worrying about such things as the potential impact of eating garbage on your long term health prospects.

One of the great libertarian memes when slamming food stamp recipients is that they use the stamps to buy sodas and snack cakes. Well, OF COURSE they do. Have you checked the price of a liter of Coke versus the same amount fresh milk or orange juice lately? And as for the snack cakes, if you're going to have to eat shit anyway it might as well be SWEET shit, right?

The simple fact is that the food stamp program as currently constituted is NOT at all designed to help poor people who might starve to death without it. They merely serve as the delivery mechanism to transfer public funds to the American food industry under the guise of providing a social safety net. A sensibly run program would tightly restrict the kinds of items that could be purchased, and would not include crap that is little better than slow acting poison to the people who consume it. But heavily processed items full of deadly additives like high fructose corn syrup are the most profitable for the food industry, so you have a program that not only allows those items to be purchased but is insidiously designed to ensure that the recipients cannot afford to buy healthier alternatives.

This same dynamic applies to any of our social welfare programs. Medicare and Medicaid are merely a pass through providing government health care money to the hospital, pharmaceutical and related industries. Rental assistance payments go directly to private landlords, FHA insured mortgages backstop money being loaned to home buyers with risky credit, student loan guarantees allow for-profit colleges to thrive even though half of the students who borrow money to enroll in those schools end up defaulting on their loans--the list just goes on and on. What's more, it doesn't even include the REALLY big corporate welfare giveaways like defense war contracts and agriculture subsidies.

One big blind spot most libertarians seem to have is not recognizing that the big corporations are every bit as big a threat to individual liberties as big government. When a tiny set of corporate elite control production of everything you need to live your life, they've got you by the balls even if they don't formally control the means of official coercion. The second big libertarian blind spot is not recognizing that the big government they rail so passionately against no longer exists to serve anyone BUT the big corporations. Across the board, government policy making has become completely captive to the ability of elite private interests to make some kind of a buck from it--Obamacare being just the latest unfortunate example.

So go ahead, libertarians. Keep blaming the "parasites" and the "useless eaters" for sucking down your precious tax dollars. Keep making dumbass analogies comparing the food stamp program to feeding wild animals. And rest assured that your real overlords will be thanking you for your misguided support as they count up the billions of dollars they earn from strip mining the very programs that you are so impotently stomping your feet about.