Miami Will Wallow in Shit After Horrible Baseball Stadium Deal 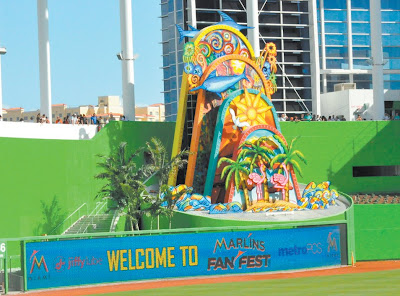 image: just that hideous abomination pictured above alone cost the taxpayers of Miami a cool $3 million.

Back on December 4th in my post, "SEC Investigating Dirty Baseball Stadium Deal in Miami," I highlighted a story of how officials of Miami-Dade County got fleeced by the ownership of the Miami Marlins, and may have been bribed to get them to approve a new taxpayer funded stadium:


The Marlins pushed the limits on exactly how much a team can hold its city hostage. They cried poverty and threatened to move unless they got a new stadium while refusing to disclose their financial records – records that were later leaked and showed a team swimming in tens of millions of dollars in profits and funneled millions more to a corporation run by team owner Jeffrey Loria.

Miami-Dade County commissioners nevertheless voted 9-4 in favor of taking out loans that will cost the county $2.4 billion over 40 years to help build the stadium in Little Havana, about two miles west of the city. Critics across south Florida panned the deal, which gives the Marlins all stadium-related revenue and imbued the team with a new attitude entering this offseason.

That story was bad enough, but now comes word that while the Miami-Dade County commissioners were showering taxpayer money on scumbag billionaire Marlins owner Jeffrey Loria, a dire crisis was building up elsewhere in the county. From the Miami Herald:


Miami-Dade County’s three main water treatment plants and nearly 14,000 miles of pipelines are so outdated it would take more than $1.1 billion just to replace the “most deteriorated, vulnerable sections” of the system, a newly released internal study shows.

Corrosion is so pervasive in the county’s water and sewage-treatment plants, and pipes that move water and sewage, that initial repairs could take from three to eight years, the five-month study found.

Federal regulators told the county two months ago that it must perform repairs and upgrades. The U.S. Environmental Protection Agency and Department of Justice, along with the state Department of Environmental Protection, are expected to take another four months discussing with Miami-Dade how to fix and pay for a system that Renfrow said is “being held together by chewing gum.”

The study, requested by Commissioner Barbara Jordan, shows the majority of the initial fixes — about $736 million of immediate work — is needed for sewer lines. Water lines would take another $364 million to repair.

The county’s main water treatment in Hialeah, and two sewage plants, on Virginia Key and in South Miami-Dade, are 56, 45 and 87 years old, respectively.

Fixing wire and concrete erosion in pipes would cost about $10 million, and fixing water mains, tanks and pumps would cost another $129.4 million, the study estimated.

Not to put too fine a point on it, but obviously Miami-Dade County had better things to do with its money than build a fucking baseball stadium.

But hey, I guess at least the citizens of Miami now have a great baseball team to cheer for while they hold their noses because of all their stopped up toilets, right? Wrong, Natch. Here's Yahoo Sports with that tale of woe:


Here is how the con worked.

The Florida Marlins owners whined, and they brayed, and they swore up and down that they couldn't afford the new stadium necessary to raise their payroll from embarrassing levels and compete annually. And they got it, the vast majority on the taxpayer's teat no less, this gleaming new gem from which they would fatten their pockets by taking all of the ticket and concession and parking and advertising sales, every last cent, no matter how unseemly that felt.

To allay fears, they changed their name to the Miami Marlins, their colors to a rainbow vomiting, their image to reflect the city, hot enough that the New Yorker would profile them and Showtime would broadcast a documentary on them and free agents Jose Reyes and Mark Buehrle and Heath Bell would take the money. People actually bought into the thing, recognized them as a real team and not just some affiliate run by a couple of swindlers who had already screwed Montreal and were primed to do the same to another city.

It wasn't ever going to end any other way. You knew that. You knew. When Jeffrey Loria and David Samson are involved, it can't end any other way, because they know no different. Loria is the owner of the Marlins, Samson the president, and they're turning the Miami Marlins into a chop shop. Anibal Sanchez and Omar Infante were traded first this week, to the Tigers. Then Hanley Ramirez, who until this year Loria regarded as the franchise, to the Dodgers. Next could be Josh Johnson, their homegrown ace.

That would be $32.75 million shed within a week, bringing the Marlins from their $100 million dream back to the bottom quarter of payrolls in baseball.

And Miami is stuck with $2.4 billion in stadium debt service for that.

This would be falling-down funny if it weren't so very sad. Two charlatans, ripping off a major American city and laughing all the way to the bank.

In other words, the Marlins are still a shitty baseball team that is once again dumping its star players via trades in order to save money.

So how long do you suppose it will be before we start hearing rumblings about Miami-Dade County possibly having to declare bankruptcy because it can no longer afford to maintain its basic services? Meanwhile, instead of occupying a prison cell as they should, scumbag Marlins owner Jeffrey Loria and Team President David Sampson will be sitting pretty in the owner's box of the cushy new baseball stadium they built with money kindly donated by the taxpayers of a community that no longer can even afford working toilets.