Why Are Pension Plans On The Ropes? It's The Math, Stupid 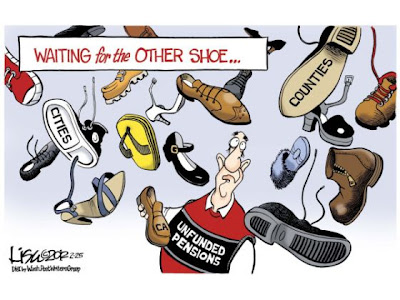 An article appeared on Saturday about yet another municipal government out in California struggling with exploding pension costs. In both the public and private sectors, pensions have become a gigantic financial anchor, dragging down balance sheets. How did all of this come about? Many libertarian types will say that its because workers have "unrealistic" expectations about what is "owed" to them in retirement. That argument, however, is just typical callous Randian nonsense. The real reason why pension plans are in trouble is because of unrealistic expectations not on the part of retirees but by the supposed financial geniuses who run the pension plans.

It all really comes down to a lack of understanding of basic math, particularly exponents, and the simple fact that exponential growth in a finite world is simply not possible. Let me show you what I mean. Here is a brief excerpt from the Yahoo News article about the woes of the California pension system:


Meanwhile, the giant California Public Employees' Retirement System (CalPERS), the largest public pension fund in the country, has been engaged in a tortured debate about whether its rate-of-return assumptions are too optimistic.

The CalPERS plan covers state workers and dozens of cities that voluntarily joined its system.

It recently cut its annual return assumption to 7.5 percent from 7.75 percent, which would raise the shortfall it previously had estimated at $85 billion to $90 billion. CalPERS says it has easily met its return target for 20 years, but Stanford's Joe Nation and other economists say a lower rate would better reflect the uncertain outlook for markets and a century-long record of market returns. On Friday the Dow Jones industrial average fell to its lowest level in 2012 - dropping into negative territory.

That explains why Nation calculates the collective shortfall at CalPERS, the smaller California State Teachers Retirement System and a state university plan at half a trillion dollars - he assumes lower returns than do systems run by the state and cities like San Jose.

It's some consolation for California, perhaps, that the bill mounts slowly - and other states are in even worse shape.

"The pension situation in California is by no means the worst," said Douglas Offerman, an analyst at Fitch Ratings. "We rate California lower than we rate any other state. We do not rate it at that level because of its employee obligations."

It should be plainly obvious from this story that the pension plans are in trouble because they are anticipating a completely unrealistic rate of return on their investments. Yes, I'm sure they "easily met the return targets for 20 years" given that the DOW more than tripled between 1992 and 1999. The bull market run of the 1990s was certainly amazing, but it was also a total historical anomaly.

However, let's say you started a brand new pension plan on March 29, 1999, and indexed your plan to perfectly track the DOW. You might have felt giddy that day, as the DJIA was in the process of capping off an incredible six year run that saw it close above 10,000 for the first time ever. And let's say for your pension plan you decide to assume an annual rate of return of 7.5%, just as CalPERS is doing now.

Flash forward 13 years. How's your plan doing? Well, in order to make your targeted 7.5% rate of return, the DOW would have to be sitting at around 25,700 as I sit here and write this post. Given that as of the end of last week it actually closed at 12,118, your pension plan is now more than 50% underfunded, not because the retirees are being greedy but because you, the money manager in whom so many people misguidedly and naively placed their trust, are an incompetent idiot.

Maddeningly, this obvious incompetence continues, despite the fact that right now the DOW is sitting around 2,000 points, or about 15%, lower than when it hit its all time peak in 2007. That's a five year negative return rate even with all of the money pumping by the Federal Reserve and the massive deficit spending by the federal government in the meantime. It's hysterical that CalPERS is now engaged in a "tortuous debate" about whether its rate of returns assumptions are too optimistic when it should be obvious that they would be so even if they were to be slashed by HALF. To believe that the 7.5% assumption is accurate is to believe that the stock market will double in value in the next decade. Given that there are no drivers for good jobs in this economy and that without good jobs consumer spending cannot continue to increase, does that sound like a good bet?

Right here we also see one of the big reasons why Benny and the InkJets have been so desperate to prop up the stock market. Yes, as many commentators have pointed out, "grandma and grampa" living on fixed incomes are being badly hurt by the nearly non-existent interest on their savings account, but they would be be hurt even more if their pension plan goes bankrupt. The next major market crash, whether it comes next month, next year or in five years, will be an absolute catastrophe for pension plans both public and private all across the nation. Given that the Federal Reserve and the federal government appear to be running low on the ammunition needed to keep stocks propped up, that is a very ominous thought indeed.