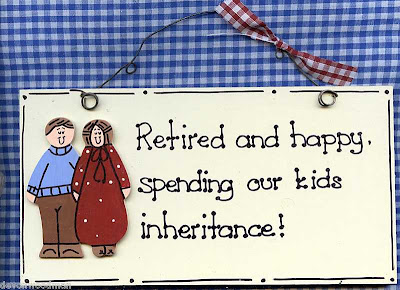 I guess this is the week for stories about America's long term demographic problems. As someone who sincerely hopes that his father spends his very last dime on the day he departs from this world, I have a hard time working up too much empathy for these people. Here is the Atlantic Journal with the details:


The Wall Street Journal has some news for you, Baby Boomers: Not only have you suffered financially in the recession, but that inheritance you're counting on from your parents, well, you might not get it after all. This is because today's grandparents are probably going to live a long time, long enough to spend their money for themselves. You might actually have to take care of them. Curses! According to Anne Tergeson:

As a group, boomers likely won't be getting as much of an inheritance as they hoped. Even worse, far from receiving a bequest, a growing number are tapping some of their own savings to help their cash-strapped parents make ends meet.

For families, the result is often a lot of scrambling, dashed dreams, and conflict and angst as parents and children try to come to grips with the lean new reality—and divide up a smaller pie.

The growing aging population in the U.S. is a real thing, not to be scoffed at. Tergenson gives us the numbers: "a 65-year-old man has a 60 percent chance of living to age 80 and a 40 percent chance of reaching 85. For women, the odds are 71 percent and 53 percent, respectively." This means that seniors aged 85 and older are actually the quickest growing portion of the population. Which means, best case scenario, hooray: Our parents and grandparents will be with us for a long while! But not everyone has planned, financially or otherwise, to live that long—and even if they have, the money they've saved may not be enough to cover it, particularly if they become ill and need medical treatment. And living so long, who won't? As Michael Wolff wrote in New York magazine in May, the parents of adult parents are living longer and longer, even past the point some would describe as actually "living," instead being kept only basically alive by doctors and medical technologies. This is a real issue.

But the way The Journal covers it, as if children are sitting around waiting for their parents to drop dead so they can collect the cash, seems a little...odd. Are so many baby boomers really counting on their parents' money? Is it really so awful to assume that you might need to help your parents financially, should they live into their 90s? This article seems to say yes.

"Due to the new realities of longevity, adult children—who have rightfully assumed they would inherit something substantial from their parents and have lived their lives accordingly—can no longer count on that," says Lillian Rubin, a sociologist, psychologist and author.

It's that "rightfully" that's so strange: Suddenly, that sense of entitlement we judge in Millennials and, for example, the character of Hannah in Girls, who allowed her parents to support her in her twenties, appears to stem from a far more established source, i.e., the Baby Boomer. Is it worse to expect cash from mommy and daddy when you're 20...or 60 years old?

It's one thing to point out that the set of circumstances—each generation tending to do better than the proceeding, and passing along their economic successes for the next to improve upon—may have changed in recent years. This has changed still from situations longer ago, in which aging parents were never expected to live anywhere but with their children, who probably supported them, too. But Rubin's point about rightful expectations is held up by the stats. According to Boston College's Center on Wealth and Philanthropy, "baby boomers and their offspring could inherit as much as $27 trillion over the next four decades, with the progeny of the wealthiest pocketing much of the windfall." There is money there, it's just not going to go to everyone.

We hope, anyway, that the inheritance-expecting are outnumbered by the adult kids reflected in a quote from 63-year-old Gary, who told the Journal, "An inheritance would help, but I am not looking forward to it. I don't want an inheritance if I have to lose someone I love." Or, as commenter Bill Scurrah wrote, "I can't help but be bemused by this article. As the son of parents of very modest means, and a person of modest means myself, I never expected to inherit anything but a few sticks of furniture and a photo album. If it had not been for Social Security and Medicare, and the 60K we got from selling their town house, my mother, who survived my dad by two years, would have had nothing to live on and no way to pay her medical costs (which, by the way, were quite modest compared to some of the estimates I come across for old age care). There are millions of people who simply do not operate in the realm of inheritances, investments, expensive retirement facilities, etc. For us, articles like this describe life on a different planet."

I know it would never be allowed to be enacted, but I would favor a 100% inheritance tax on every estate after all debts have been paid off. If you really want to bust up the great concentrations of wealth in this country and the power that the 1% have over the rest of us that would be the way to do it. Plus it would be a great boon to the economy as all the rich old fuckers try to spend all of their wealth before the government can get ahold of it. Truly, a win-win all around.


Bonus: What a way to go