Nazi Germany’s Example and the Future of America (Part 3): The Hologram Vs. The Propaganda Ministry 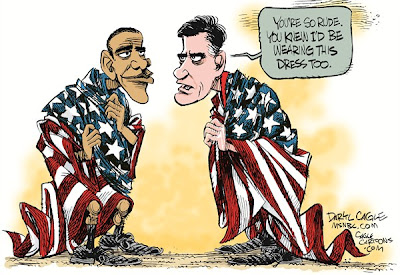 There was outrage expressed in certain liberal and libertarian corners of the Internet a couple of weeks ago when a bipartisan (there is that damnable word again) amendment was proposed to the 2013 Defense Authorization Bill which would in essence allow the federal government to produce the same formal propaganda it already disseminates around the world through vehicles like Voice of America for domestic consumption. From the level of consternation, one might have gotten the mistaken impression that the American public is not already subject to a massive 24/7 propaganda campaign that is a far more effective form of mind control than anything the federal government could ever hope to conjure up.

The sad fact is that were Nazi Germany's Minister of Propaganda, the utterly loathsome Dr. Joseph Goebbles, still alive today he would only be able to stare in slackjawed awe at just how sophisticated American propaganda has become compared to the clumsy, heavy-handed efforts he and his minions produced from 1933-1945. For it is one thing to control public opinion after you've made a gigantic nationwide bonfire out of "subversive" literature and have in the Gestapo an instrument of terror and repression that among other things considered listening to the BBC on the radio to be an act of treason, but it is something else again to exercise that same level of control over the majority's thoughts and opinions without any form of overt coercion.

The late, great author and blogger Joe Bageant used to refer to the media as the American Hologram, a term that I have borrowed to employ frequently on this blog because it so perfectly describes what it has become, especially on television. It must be said, however, that this was not always the case. There was a quaint time in America, oh say about 44 years ago, when anchorman Walter Cronkite could effectively spell the doom of yet another American mindless military adventure by uttering the following words on the air:


We have been too often disappointed by the optimism of the American leaders, both in Vietnam and Washington, to have faith any longer in the silver linings they find in the darkest clouds. They may be right, that Hanoi's winter-spring offensive has been forced by the Communist realization that they could not win the longer war of attrition, and that the Communists hope that any success in the offensive will improve their position for eventual negotiations. It would improve their position, and it would also require our realization, that we should have had all along, that any negotiations must be that -- negotiations, not the dictation of peace terms. For it seems now more certain than ever that the bloody experience of Vietnam is to end in a stalemate. This summer's almost certain standoff will either end in real give-and-take negotiations or terrible escalation; and for every means we have to escalate, the enemy can match us, and that applies to invasion of the North, the use of nuclear weapons, or the mere commitment of one hundred, or two hundred, or three hundred thousand more American troops to the battle. And with each escalation, the world comes closer to the brink of cosmic disaster. To say that we are closer to victory today is to believe, in the face of the evidence, the optimists who have been wrong in the past. To suggest we are on the edge of defeat is to yield to unreasonable pessimism. To say that we are mired in stalemate seems the only realistic, yet unsatisfactory, conclusion. On the off chance that military and political analysts are right, in the next few months we must test the enemy's intentions, in case this is indeed his last big gasp before negotiations. But it is increasingly clear to this reporter that the only rational way out then will be to negotiate, not as victors, but as an honorable people who lived up to their pledge to defend democracy, and did the best they could.

Try to imagine for a moment the likes of Katie Couric, Anderson Cooper or the vacuous Brian Williams going on the air and directly defying the President and the whole American military establishment like that. It is simply not conceivable. Or even more incredibly try to imagine, even if one of them actually had the courage and fortitude to risk the condemnation of the right wing, their corporate bosses actually allowing them to do so. Of course, there is no formal censorship in modern America (other than the ridiculously hypocritical "decency" standards set by the FCC), but the informal censorship of having to "play the game" in order to keep one's job is every bit as effective, if not more so.

This didn't all happen overnight. It was long and winding path from the late 1960s and early 1970s--when press freedom in America was arguably at its all time peak--to the relentless hyping of the status quo that we see today. The most important factor which influenced this change in the media landscape was corporate consolidation. These days, a handful of conglomerates own the vast majority of media outlets in America--a trend that began in the 1970s, but really got rolling during the Reagan years. Moreover, the conglomerates that have taken over the media have tentacles that reach into many other industries as well.

Take General Electric, for example, which owns NBC. Laughably, NBC is what passes for a "liberal" media news outlet these days, despite the fact that among other business interests, GE is heavily involved in the financial, nuclear power and defense war industries. If one is a reporter who works for NBC, one instinctively knows that there are limits to how critical you can be of those industries despite the massive amounts of human misery each has been responsible for in recent years. No one needs to order you to censor yourself. "Don't piss off the boss" is a well understood golden rule of survival in the modern corporate world.

Media consolidation has placed the ultimate control of information, particularly through television, into the hands of a tiny group of billionaires, and they are extremely skillful in how they exercise that control without overtly appearing to do so. Goebbles and his ministry pioneered the idea of using mass entertainment like movies and radio shows to disseminate propaganda, but the efforts of the Germans during the Nazi period look pretty quaint by today's standards. Leni Reifenstahl's groundbreaking film, Triumph of the Will, may have wowed those Germans already in the thrall of Hitler, but it was actually pretty transparent in its slavish devotion to Der Fuhrer and thus unlikely to have been at all convincing to the uncommitted. Modern American propaganda (anywhere other than on Fox News) is subtle, and much of it does not appear to the unaware to be propaganda at all.

Perhaps the most devilishly brillant concept to be injected into the American Hologram was the massive distraction. This particular form of art has reached its zenith with the current cultural dominance of "reality" shows that are anything BUT real. Seriously, we have now had, for example, ten plus seasons of the execrable American Idol. When does even its slackjawed audience finally get sick of it already? Take as another example the absurd level of coverage the National Football League receives. Even its annual draft now gets two nights of coverage in prime time, to say nothing of thousands of hours of inane analysis before and afterward. It wasn't more than about 15 years ago when the NFL draft wasn't even televised!

Television has always been considered by intellectuals to be a cultural wasteland, but there was a time when popular shows like All in the Family and MASH frequently tackled truly controversial issues. Moreover, the rise of first cable and then satellite television, and the proliferation of hundreds of new channels (and also introducing the concept of people actually PAYING good money for their propaganda...Goebbles would no doubt have fainted from shock at the very idea that such a scheme could possibly be successful), allowed the media corporations to segment the audience into tinier and tinier targeted advertising groups, all the better to pander to their prejudices and not incidentally advertise those products the marketing research indicates they are most apt to blow their money on.

The modern media machine finally reached the zenith of its effectiveness in dumbing things down for the masses within the past decade in the aftermath of 9/11. When snippets of 1960s antiwar anthems like Creedence Clearwater Revival's "Fortunate Son" ("Some folks were born to wave the flag...oh that red, white and blue") and The Guess Who's "American Woman" were used with a straight face in patriotic themed car and jeans commercials, it was an indication that the mind-control powers of the Hologram had at last been perfected. So much so that it took Americans nearly eight full years of one unmitigated disaster after another before most of them finally realized that George Bush the Lesser might not be the best person in the world with whom to sit around and have a beer to say nothing of actually running the country.

The oligarchs also came to recognize that they need not exercise complete control over the dissemination of information as Goebbles so desperately tried to do. There are still sources of truthful information available out there, particularly in the Internet. The problem is that the audience for it is so tiny and fragmented that it presents no significant challenge to the status quo. Thus are the elites able to maintain the lie that America remains a representative democracy in which every adult has a voice, and as a result nearly all of the 135 million or so Americans who will faithfully trudge off to the polls on the first Tuesday this November will have been conditioned to believe that the outcome of a sham presidential election between two oligarch-backed candidates is more of a "choice" than the Germans had in the election of November 1933 after all political parties other than the Nazis had been formally banned. Looked at from this perspective, one really has to wonder why anyone in Congress really believes that having the federal government redirect its formal propaganda machine domestically is at all advisable or even worth the expense and effort.