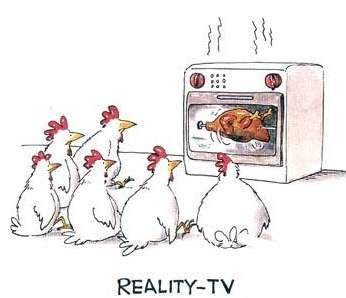 If you read my blog on a regular basis, you might get the impression that I hold out no hope of our sick civilization managing to save itself. You would be right in that assumption, and from the Raw Story, here is yet another reason why:

“World’s Worst Tenants” will feature crazy-but-true stories, as recounted and apparently acted out by professional evictor Todd Howard and his team of… other evictors. Just don’t call them thugs.

“Howard and his team take viewers behind closed doors into the most heated, high-stakes disputes between landlords and their tenants,” the show’s website explains. “Each mission documents the process and procedure that allows this no-holds-barred team to operate within legal guidelines to resolve each case on behalf of their clients.”

Don’t call it a “reality” show, either. “The series showcases the most compelling stories in his career through reenactments of many of the actual confrontations that Howard and his team have experienced over the years,” the site adds.

Evictions and home foreclosures have become a hot-button political issue since the 2008 economic crisis engulfed Wall Street firms that had leveraged too much risky debt. Protesters with the “Occupy” movement in the U.S., and other groups in countries around the world, have taken to staging sit-in demonstrations during foreclosures and evictions as a way of not only protecting their neighbors, but also making a point about economic fairness and income inequality.

It’s not clear why Spike TV decided to go with reenactments of actual evictions as opposed to a “Dog the Bounty Hunter” style ride-along show. Spike TV producers did not respond to Raw Story’s request for comment.

So what next? Maybe we can send a camera crew into mental hospitals and film the patients having psychotic episodes and seizures. Won't that be great for a fucking laugh?