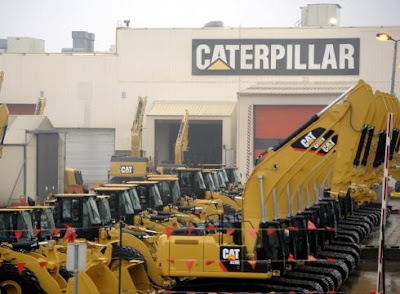 Sometimes, a story will speak for itself without needing me to make any additional comment. Here is the Sky Valley Chronicle with the details:


Now comes word that workers at an Illinois plant for the manufacturer Caterpillar have been on strike for a month after rejecting a “concession-heavy contract” proposed by the company, say union officials. Last Friday workers rejected a second Caterpillar offer, by a vote of 504-116.

According to a new report by Nation of Change the contract “provided no raises, eliminated the defined benefits pension program, weakened seniority rights and required machinists to pay higher contributions for health care.”

“All of this, at a time when the company is making record profits. In fact, Fortune Magazine recently said the company is “crushing it” when it comes to profitability,” yet at the same time refuses to give its workers a raise while the company did see fit to increase its CEO’s pay by 60 percent.

The annual compensation of Caterpillar Inc.’s chairman and chief executive rose 60 percent in 2011, as the company posted record revenue of $60.1 billion.

The typical American worker would have to work 244 years in order to earn what the average CEO makes in just one year.

Over the last 30 years, CEO pay has increased 127 times faster than worker pay, says the report.

The prosecution rests.
Posted by Bill Hicks at 6:26 PM