Well, OF COURSE Obamacare was Upheld 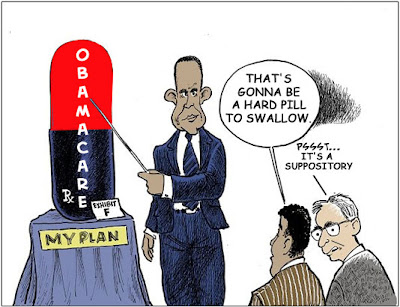 Lots of clueless political observers, especially those who occupy the mainstream media, are furiously scratching their heads this morning wondering just how it could possibly be that Chief Justice John Roberts, he of the atrocious Citizens United decision, sided with the Supreme Court's "liberals" in upholding Obamacare when in fact the answer should be glaringly obvious to anyone who understands how America really works these days. Just like with Citizens United, this was a pro big business decision. Obamacare's hideous health insurance mandate will be a boon for the insurance companies that will do absolutely nothing to curtail the exploding costs of health care. And that is just the way the health care industry wants it. This is an industry after all, which now boasts the highest paid CEOs, higher than any on Wall Street, including one who pulled down an astounding $145,266,971 in compensation during 2010.


The Supreme Court has ruled 5-4 that the Affordable Care Act meets constitutional muster and can be allowed to continue its slow process of transforming the nation’s health care system.

Thursday’s historic decision, authored by Chief Justice Roberts, was by no means fait accompli. Though the consensus among constitutional scholars has always been that the law’s insurance mandate did not exceed Congress’ Commerce Clause powers, its opponents erected a counterargument that quickly became an article of faith on the right. In the end, Roberts’ decision upheld the mandate as an exercise of Congress’ taxing power.

The outcome has been a matter of tense speculation, hope and anxiety both in Washington and around the country from the moment President Obama signed health care reform into law.

And in the days leading up to the decision, a peculiar conventional wisdom took hold — in the media, and among political and judicial veterans — that the mandate, and possibly other key provisions, or the whole statute, would fall.

But during oral arguments, Roberts tipped his hand, and provided the Court a glimpse at his reasoning. And in siding with the Court’s liberal wing, he may have saved the entire law. In the dissenting opinion, justice Anthony Kennedy, writing on behalf of justices Samuel Alito, Clarence Thomas, and Antonin Scalia, held that “in our view, the entire Act before us is invalid in its entirety.”

In other words, Roberts signaled to the other scumbag conservatives on the court that he would be the one to "sell out" his supposed principles and give them cover to vote against the decision and make it look like the fix wasn't in all along. This was such a beautifully orchestrated bit of political theater that I almost feel like I should stand up and applaud.


Bonus: Might as well learn to live with Obamacare, as now it's the law