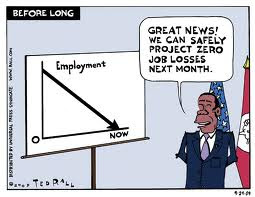 You really can't make this stuff up. On Friday, the very day President Hopey-Changey got slammed by the latest monthly jobs report, he gave a campaign speech in which he pledged to give every American household $3,000 to spend on a "thingamajig."

And the idiots in the audience laughed instead of being utterly horrified at just how obviously out of ideas their president and his advisers are as to how to fix the economy. I have a better idea, why doesn't the government just stop collecting taxes altogether? After all, the Treasury can now borrow all the money we need at about 1.5% interest, and that would be sure to send consumer spending through the roof.

What Obama is doing, of course, is pandering to the worst impulses of Spoiled Rotten Nation. I didn't actually see this video until after I wrote this morning's post about how Obama is now in deep trouble with the election only five months away. Seeing how desperate he sounds here convinces me that he knows it, too.
Posted by Bill Hicks at 12:54 PM