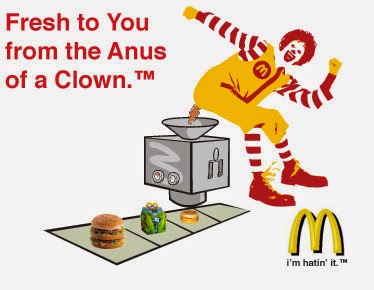 It could happen to a more deserving group of corporate assholes:


February was an ice-cold month for McDonald's, with same-store sales dropping 4% in its troubled U.S. stores and 1.7% globally.

Sounds like these are troubled times indeed under the tarnished golden arches. So what does the company plan to do to reverse this decline?

"Customer needs and preferences have changed?" Oh, you mean that minimum wage earners--like your own employees--are feeling the strain of working for such shitty pay that they can no longer even afford to eat out at McDonalds as much any more? If so, "resetting your strategic priorities" to "restore business momentum" would mean that your company along with every other minimum wage paying retailer out there needs to RAISE FUCKING WORKER SALARIES. But I gather that's the LAST fucking thing you assholes would consider doing.

Oh, but there seem to be some other silly ideas floating around:


At an investors' conference last week, McDonald's also said it planned to launch a mobile app this summer that may also be part of a loyalty program...

I just wonder if any of the empty corporate suits who get paid big bucks to come up with these stupid ideas ever actually visit their company's shitty restaurants--especially those located outside of tourist areas. Go in, sit down for a while and see how many of the downtrodden people for whom a trip to Mickey D's represents a big night out are carrying around fancy smartphones.

In addition, there was this little nugget:


"It's interesting that McDonald's had a 'Turnaround Summit' last week in an effort to address its U.S. sales decline. The focus for the fast-food chain will be on enhancing the restaurant experience, which it hopes will help curb the decline," says Joshua Raymond, chief market strategist at City Index UK.

Yeah, that's the problem right there. It isn't because McDonald's customer base can no longer afford to stuff the faces with its garbage "food" four nights a week, instead they just need to spruce up the large indoor toilets they call restaurants, as if most of their "discerning" customers even notice how drab and depressing the fucking places are--despite the hideously bright fluorescent lighting.

The article ended, of course, in the most laughable fashion possible:


In its own statement, McDonald's spelled out its goal in no uncertain terms: "To be a true destination of choice around the world and reassert McDonald's as a modern, progressive burger company."

Somebody please tell me exactly what it means to be a "modern, progressive burger company," because I have no fucking clue. It's too bad the corporate stenographer posing as a "business reporter" working for USA Today couldn't have at least ASKED some publicity flack at the company just what that meaningless pile of corporate speak bullshit really means. That might have at least been entertaining.

The good news in all this is that it sounds like McDonalds' corporate "leadership" remains utterly clueless as to how they can reverse their serious sales decline. It's probably to much to hope that the nosedive will continue all the way into bankruptcy for America's largest purveyor of shitty food and ugly ass retail buildings. But a blogger can dream, can't I?


Bonus: In this case, the real clowns are not Ronald but the empty corporate suits