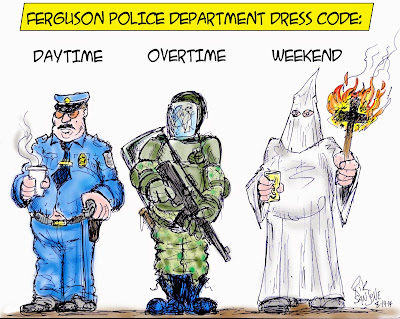 The two DOJ reports on the epic fuckery going on within the Ferguson, Missouri, criminal justice system ought to send a chill up the spine of every American, not just because of the blatant racism of the city police department but because of what the whole shitty situation says about the state of so-called American democracy. It's hard to know where begin with this hideous story. We could start with the fact that a part time municipal judge who apparently routinely jailed people for being late paying small municipal fines was paid over $56,000 a year for holding exactly TWELVE annual circuit court sessions--at a robust taxpayer funded hourly rate of $1,500. Oh, and that same asshole judge also owes the federal government $170,000 in back taxes. Motherfucker's got some gonads on him, I'll say that.

Even more appalling was the fact that from 2012-2014, 93% of all arrests made by the Ferguson PD were of black people. Additionally, two Ferguson cops and the county clerk have lost their jobs for sending racist e-mails, which is amazing given that the asshole police chief said that he would not fire Darren Wilson for killing Michael Brown (Wilson resigned after the grand jury failed to indict him). E-mailing is worse than killing--that's the message here, I guess. And even before the DOJ reports were released, one of the Wilson grand jurors attempted to sue the county prosecutor for his mishandling the presenting of the case, and it was further reported that the prosecutor knowingly allowed one of the witnesses to lie to the grand jury.

So given all of the above, particularly the appallingly racist arrest record of the Ferguson PD, the key question is: how did all of this happen in a community in which as of the 2010 census more than two-thirds of the citizenry are black? Because, my friends, just as I stated in a much different context in my recent post about Hillary Clinton's e-mails, most American voters simply do not give a shit about the rampant abuse, fraud and corruption going on at all levels of their god damned government.

How else does a town that is overwhelmingly black end up with a nearly all white police department, and a racist one at that? How else does all the other corruption and petty bullshit that was going on in Ferguson happen for years on end with nothing being done about it? How else do the city officials get so fucking arrogant as to not only engage in these practices but then to order the jackbooted thuggery we saw being employed against the citizenry when it finally, many years too late, erupted into protest last year? I'll tell you how:


Voter turnout in the most recent mayoral election was approximately 12%. The Mayor ran unopposed.

The sad fact is that everyone in that town, black and white, protestor or not, should take a moment and reflect upon their own culpability at electing the shitheads who created the climate in which the Michael Brown shooting became inevitable. Darren Wilson pulled the trigger. He got away with the killing by claiming he feared for his safety. But by his own admission he was hassling Brown and his friend for the "crime" of walking in the street instead of on the sidewalk, and though we'll never know Brown's side of the story it seems likely HE reacted as the resident of city in which the police were viewed by most as an occupying army but the adult citizenry were to damn apathetic to do anything about it until after he was killed.

But don't get too cocky even though you may not live in Ferguson. It is exceedingly likely that your dismal 2016 presidential choice will be between the twin oligarchs Hillary Clinton and Jeb Bush. And THAT is the collective result of more that three decades of the vast majority of Americans being so ill informed that they--Republican, Democrat or even independent--have been making increasingly shitty choices, degrading the electoral system at the national level to the point where realistically there is no longer any more choice than there was for mayor of Ferguson last time around.

This does not mean that I advocate participating in sham election like the 2016 presidential contest other than to maybe cast a third party protest vote. But at the very least people ought to pay attention to what is going on at the local level, because the people who have control over your local government have the most direct control over your day-to-day life. Had literally just a few hundred voters in Ferguson lined up behind a reformist candidate for mayor last time around, Michael Brown might still be alive today.

So RIP Michael Brown. Sadly, it took your violent and completely avoidable death to wake up your friends and neighbors and get them to demand that things finally change in Ferguson, Missouri. What it would take to do the same on the national level I can't even begin to imagine.


Bonus: "I don't wanna be no mothafuckin 'accident'"