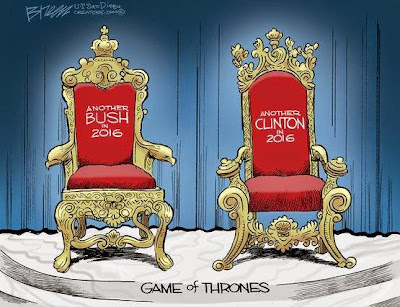 In the past two days, two editorials were published that do a reasonable job of summing up some very disquieting new American political realities. The first, entitled "Ferguson and the Criminalization of American Life," by Anthropoly Professor David Graber of the London School of Economics, uses the recent Department of Justice report as a centerpiece to show how local governments are increasingly becoming predatory institutions, using the criminal justice system to financially squeeze those at the lower end of social ladder on behalf of the big banking institutions:


The police, then, are essentially just bureaucrats with weapons. Their main role in society is to bring the threat of physical force—even, death—into situations where it would never have been otherwise invoked, such as the enforcement of civic ordinances about the sale of untaxed cigarettes.

For most of American history, police enforcement of such regulations was not considered a major source of funding for local government. But today, in many municipalities, as much as 40% of the money governments depend on comes from the kinds of predatory policing that has become a fact of life for the citizens of Ferguson. How did this happen? Some of it, of course, has to do with populist anti-tax movements, beginning with California's Proposition 13. But much of it has happened because in recent decades, local governments have become deeply indebted to large, private financial institutions—many of the same ones that brought of us the crash of 2008. (In Ferguson, for instance, the amount of revenue collected in fines corresponds almost exactly to that shelled out to service municipal debt.) Increasingly, cities find themselves in the business of arresting citizens in order to pay creditors.

In this light the killing of Michael Brown can seen in a much different way, one in which Darren Wilson may not have acted as an out of control racist cop but instead as a glorified bill collector with a gun who overreatced when Brown forcibly refused to be exploited financially for the "crime" of walking in the street rather than on the sidewalk. It is very possible, even likely, that Brown's death was due as much to the greed of the big banks as it was to an institutionally racist police department and citizen apathy.

Graeber goes on to write:


Almost every institution in America—from our corporations to our schools, hospitals, and civic authorities—now seems to operate largely as an engine for extracting revenue, by imposing ever more complex sets of rules that are designed to be broken. And these rules are almost invariably enforced on a sliding scale: ever-so-gently on the rich and powerful (think of what happens to those banks when they themselves break the law), but with absolute Draconian harshness on the poorest and most vulnerable. As a result, the wealthiest Americans gain their wealth, increasingly, not from making or selling anything, but from coming up with ever-more creative ways to make us feel like criminals.

This is a profound transformation, and one we barely talk about. But it is rapidly altering people's most basic conceptions of their relations with society at large.

Fair enough. But before I comment on Graeber's conclusion, I want to move on to antiwar writer Tom Engelhardt's latest essay, entitled: The New American Order--
1% Elections, The Privatization of the State, a Fourth Branch of Government, and the Demobilization of "We the People." The premise of Engelhardt's essay is that American governance is entering a new era that is so dominated by a tiny oligarchy that it makes the Gilded Age of the late 19th century look like the late 1960s by comparison:


Let me make my case, however minimally, based on five areas in which at least the faint outlines of that new system seem to be emerging: political campaigns and elections; the privatization of Washington through the marriage of the corporation and the state; the de-legitimization of our traditional system of governance; the empowerment of the national security state as an untouchable fourth branch of government; and the demobilization of "we the people."

Whatever this may add up to, it seems to be based, at least in part, on the increasing concentration of wealth and power in a new plutocratic class and in that ever-expanding national security state. Certainly, something out of the ordinary is underway, and yet its birth pangs, while widely reported, are generally categorized as aspects of an exceedingly familiar American system somewhat in disarray.

Engelhardt then goes on to make his point much more than just "minimally," and actually concludes by saying:


In the meantime, let me be as clear as I can be about something that seems murky indeed: this period doesn’t represent a version, no matter how perverse or extreme, of politics as usual; nor is the 2016 campaign an election as usual; nor are we experiencing Washington as usual. Put together our 1% elections, the privatization of our government, the de-legitimization of Congress and the presidency, as well as the empowerment of the national security state and the U.S. military, and add in the demobilization of the American public (in the name of protecting us from terrorism), and you have something like a new ballgame.

Still, don’t for a second think that the American political system isn’t being rewritten on the run by interested parties in Congress, our present crop of billionaires, corporate interests, lobbyists, the Pentagon, and the officials of the national security state.

Out of the chaos of this prolonged moment and inside the shell of the old system, a new culture, a new kind of politics, a new kind of governance is being born right before our eyes. Call it what you want. But call it something. Stop pretending it’s not happening.

I'm not really sure who Engelhardt is addressing with that last sentence. Certainly, if your deep down far enough in the weeds of awareness to be reading his blog (or this one, for that matter), you're probably not in denial that something has gone horribly wrong in this country. But it might be because Engelhardt has deluded himself into thinking that he has a greater audience reach than he does and is NOT just preaching to the choir that he starts out so tentatively and, like Graeber, fails to address the really big question of exactly who is to blame for this state of affairs.

Engelhardt dances around the question, citing the influence of big money on politics, particularly after the Citizen's United decision, the supposed "demobilzation" of the Democratic Party and the effects of voter suppression laws. Graeber doesn't assign any responsibility at all, which I guess means that the profound changes he so earnestly documents in his essay have just fallen out of the sky. It's a common affliction of liberal essayists to either cop out by blaming "wealth inequality" for America's political ills or to want to avoid discussing the subject altogether. Because to cite the real problem is to admit that the ignorance and stupidity of the little people they so desperately wish to "save" are in fact the root cause of the very trends that are destroying our so-called democracy from within.

Engelhardt reports that the amount of money spent on the 2014 midterm elections was over $4 billion and that the 2016 presidential race alone is expected to top $5 billion--up from just over $2 billion in 2012--without mentioning that the overwhelming majority of all that campaign cash will be used to buy television advertisements. The days of door-to-door canvasing and get out the vote efforts are as forgone as the need to raise lots of money from small donors in order to have a viable campaign.

Consider the above, and now consider for a moment the level of discourse included in your average 30-second campaign commercial while recognizing that despite their sheer imbecility they are what decide our national elections. The reason for that is simple--the average American voter is so uninformed or misinformed that they either base their voting decisions on the messages they receive from such simple-minded ads or upon the fact that they see more far more ads for one candidate than they do the other.

For state and local elections the problem is far worse. As I cited in my previous article about the Ferguson DOJ report, only 12% of the registered voters in that community bothered to turn out for the last mayoral and city council election and the mayor ran unopposed. And as John Oliver points out in the brilliant rant below from his HBO show, over 1,000 state legislators ran unopposed in 2014--around than 25% of the total. Additionally, if Virginia politics which I follow are at all typical of the other 49 states, even in those instances where an incumbent state legislator or local official does draw a challenger it is rare that the race is even remotely competitive.

All of this is only possible in a system in which the citizenry has collectively abdicated its basic responsibility to stay well enough informed for representative democracy to function. It is true that the rich and powerful have a vested interest in keeping the citizenry distracted through their control of the mass media, but Americans seem particularly eager to allow themselves to be distracted and to thus become effectively disenfranchised from having any voice in their own governance.


Bonus: Why does it take an Englishman to so deftly point out what's going wrong in America?