No Kids, This is NOT "What Democracy Looks Like" 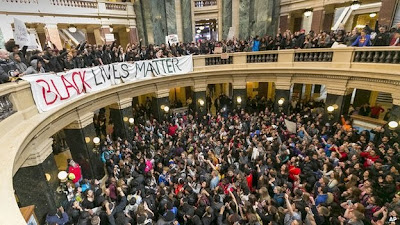 Okay, they're high schoolers, so I will cut them a little bit of slack:


Today, in response to the Friday night killing of unarmed black teen Tony Robinson by Wisconsin police, nearly 1,000 high school students marched the streets of Madison in protest, and stormed the state capitol demanding justice. "This is what democracy looks like," they shouted.

Sorry, kids, but I beg to differ.

Real democracy is boring. And it's a LOT of hard work. Just a few years ago in your own state of Wisconsin, the unions tried to effect supposedly democratic change against your asshole governor by storming the capitol in even far bigger numbers. They even went so far as to try and recall Scott Walker by referendum. And what was the ultimate result of all that fuss and fury?


When the Wisconsin State Assembly dropped the hammer on the state’s labor movement, the State Capitol was as quiet as a library. Maybe half a dozen ragged protesters stood outside the chamber hollering weakly, but the rest of the building and the grounds were serene. After two short post-vote press conferences, Madison sailed calmly on.

Regardless of whether you’d characterize the right-to-work law as fanatical or not, it’s remarkable the extent to which Madison kept mum about its passage. Besides a few dozen Democratic legislators and a few hundred labor protesters the day before, the famously liberal city was placid as the conservative legislation rolled along. The liberals who have faced Walker have lost, and lost, and lost again, and progressive Wisconsinites’ stores of outrage seem, at least for the moment, to be exhausted.

Now, you could argue that Walker won in part because of the huge amount of money ($30 million) he was able to raise, mostly from out of state big business interests. But I would argue that he also won because the protests were co-opted by the hopelessly corrupt Democratic Party, which then put up a mealy-mouthed candidate running offering the same old lame ass centrist bullshit when, as the protests showed, what was needed was some good old fashioned angry leftist populism. That might have sustained the energy of the protests through the recall election and helped overcome the big money pumped in by the Koch Brothers (the percentage of the vote won by Walker in the recall election was nearly identical to that of his initial election victory despite the big money he raised). It also seems that once the protests themselves died down, most of those who participated put away their signs and went home to resume watching American Idol or whatever--sort of an echo to what happened with the Occupy protestors.

In and of themselves, protests are NOT representative of democracy but tend to happen when democracy is either being denied or has broken down. Take the case of 1960s America. The civil rights protests were followed up by years of hard work by such figures as Martin Luther King until civil rights laws were passed that finally put Jim Crow into his long overdue grave. The antiwar protests and the 1968 Chicago Democratic convention fiasco were followed by years of work by young leftist political activists that resulted in election reforms that led to the primary election system that (very temporarily) democratized the selection of candidates within the two party system. It was only when the voters, "exhausted" by years of protest, stupidly went back to sleep that the oligarchs saw their opportunity to begin slowly reversing the political changes wrought during the 1960s and early 1970s.

So while I applaud the protestors in this instance for at least getting angry about the latest questionable violent police action against a young black person, I caution them that they should not think a few days of sign waving at the state capitol is going to change anything. Get involved and stay involved and keep fighting the bastards with everything you've got. It's hard, it's often boring and not nearly as much fun as the rush that comes from taking to the streets. But if you're not willing to to do that hard work, which is the REAL work of democracy, then there is really no point in protesting in the first place.


Bonus: The whole world may be watching, but that doesn't mean it gives a damn