Thousands Protest in Indiana--Should Have Been Paying Attention Earlier 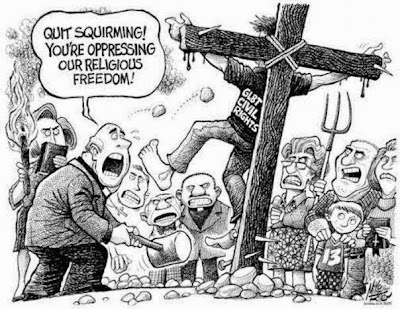 So once again, there are protests in the streets decrying massive injustice. This time, it is in the form of thousands of people waving signs in downtown Indianapolis decrying the passage of a horrendously discriminatory bill against the rights of gays and lesbians allegedly in the name of "religious freedom." Just like the 2011 pro-union protests in Madison, Wisconsin, and last year's post-Michael Brown shooting protests in Ferguson, Missouri, the protestors have a legitimate reason to be aggrieved. Nevertheless, I would still like to ask the them one simple question: how many of you got involved in the midterm election campaigns for your state representatives last year and, relatedly, how many of you actually bothered the vote in said elections?

Because I just went and checked the voter turnout and saw that only 30% of Indianan registered voters even bothered to show up at the polls. In addition, you cannot tell me that the voting records and political views of the cretins in the state legislature who voted for this horrendous, pandering law were not easily available before now.

Maybe, just maybe, instead of whining, complaining and protesting the better strategy would be to organize, get your own people on the ballot, resist the corrupting overtures of the Democratic Party (form your own third party would be my advice) and beat these fuckers at their own game. Again, I realize that national and even statewide elections are so rigged by the big money as to be virtually hopeless. But the bigoted, opportunistic assholes who created and voted to pass this law by and large won their seats with only a few thousand votes. They CAN be defeated.

But no...have fun instead chanting your chants and waving your signs. It's all just sound and fury, signifying nothing. It'll feel good for a few days--kind of like watching an episode of The Daily Show or Real Time with Bill Maher. Then most of you will no doubt go home to your iPads, iPhones and 500 channels.

And that law you hate so much will still be on the books.