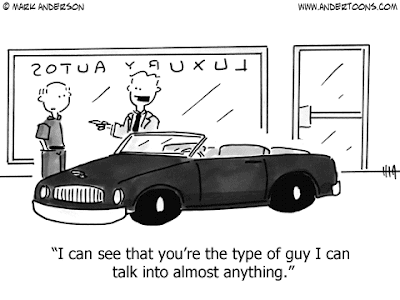 I don't watch a lot of television, but when I do it usually isn't very long before I'm bombarded by the inevitable slew of new car commercials. Almost always, these commercials make sure to mention that 0.0% financing is available to "well qualified buyers." That's why it was a bit of a surprise to read the following factoid from an article in USA Today:


Americans' average new-car loan payment hit a record $482 the fourth quarter, and car buyers were paying an average 4.56% for loans, according to researcher Experian Automotive.

I wasn't math major but even I can deduce that with the availability of zero percent financing for most makes and models these days, if the AVERAGE new car buyer is paying that much in interest it means many people are paying a far higher rate than that. These are, of course, subprime buyers with bad credit. Without them, I would gather, the automobile industry would be in deep trouble.

The average interest rate, on the other hand, doesn't seem so bad considering the cost of auto loans historically. I remember being charged 12% on my first car loan back in 1990--I was a recent college graduate who hadn't yet established much of a credit history--and that was not an atypical rate back then. It would also be the LAST car loan I ever took out as I vowed not to ever let a bank fleece me like that again.

Yep 4.56% doesn't seem so bad in comparison, until you consider how much the price of new cars has soared in recent years. Here's USA Today again:


What's more, the Experian report shows that the amount borrowed to buy a new car in the fourth quarter hit a record $28,381, up more than $950 from a year ago and a $582 increase from the previous quarter.

Edmunds.com auto researchers show the average transaction price for a new vehicle in the fourth quarter was $33,352.

That means buyers were making down payments averaging about 15%.


Experian says the average length of a new-car loan in the fourth quarter rose to an average 66 months.

Using all this data, I pulled out my trusty calculator and determined that if the average amount borrowed to purchase a new car is $28,381, the average interest rate paid is 4.56% and the average loan length is 5.5 years, then the average amount of interest paid on new car loans is a staggering $7,117, or more than 25% of the cost of the vehicle.

That's over seven grand that the average new car purchaser is pissing away by giving it to a bank, even in these times of supposedly wondrous 0.0% financing. So why are people doing it? USA Today again:


"In most parts of the country, vehicles are viewed as a necessity to everyday life, which is why we continue to see consumers willing to take out larger loans as the average price of vehicles continues to rise," said Melinda Zabritski, Experian's senior director of automotive finance.

Given how shitty or completely unavailable public transportation is outside of our major cities, it is true that most Americans cannot get by without access to a car. Where Experian's brain dead mouthpiece gets it wrong is assuming that people have to purchase new cars as opposed to used, or that they have to purchase the more expensive models. In fact, additional data from the very same article shows that used car purchasers are far more likely to buy without financing:


The new-car loan data hits home with most car buyers, because 84% of new vehicle purchases were made with financing. Used, 55.2%.

But the most disturbing factoid in the whole article is the fact that the average amount of new car loans has increased by nearly $1,000 in just the past year. Given that incomes for people outside of the top 10% have been flat for many years, that annual rate of growth cannot be sustainable for very long. Which would indicate that American new car sales will begin to decline at some point in the near future...possibly dramatically.

No wonder most Americans hate math so much.