Waving the Flag While Circling the Bowl 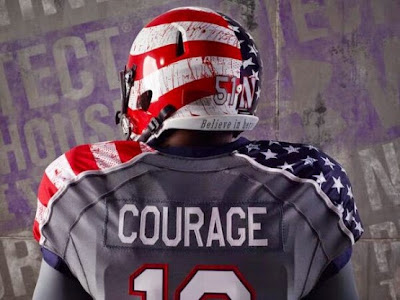 Has anyone else noticed just how obnoxious flag-waving has become in America these past few years? Plastering flags everywhere first became a huge fad right after 9/11, which should not have been unexpected under the circumstances. Those were the days when it suddenly became impossible to spot a politician anywhere out in public who wasn't sporting a flag pin on their lapel, and in which lots of people actually bothered to learn the words to the Star Spangled Banner so they wouldn't have to fake-lip sync it anymore. Even the Pledge of Allegiance and God Bless America came back into vogue, and to hell with them Atheist types if they didn't like the religious overtones of those two archaic gestures from times gone by.

The quest to make anything and everything seem patriotic got so ridiculous that the lyric "Some folks are born, made to wave the flag" from the Creedence Clearwater Revival song "Fortunate Son" and the refrain from "American Woman" by the Guess Who were used in patriotic-themed commercials DESPITE both songs being anthems of the anti-Vietnam War movement.

Such overt public expressions cooled somewhat a few years later as the Iraq quagmire deepened and then the Bush economy finally imploded. One might have then thought that with the American military having to again ignominiously pull out of yet another guerrilla war and unpopular foreign occupation, that flag waving gestures and other expressions of mindless patriotism would have gone completely out of style, but that is not what's happened. In fact, it seems to be getting worse than ever.

One habit of your average American consumer that I personally have not been able to break is watching professional and college athletics, particularly football and baseball. Now, it's a well known fact that sports fans and athletes tend to be more conservative than your average American. The days when the likes of Muhammad Ali and pitcher Bill "Spaceman" Lee openly questioned the status quo are long over. Your modern athlete is far more interested in getting endorsement deals than promoting social justice.

But for some reason, as our national malaise has slowly worsened during the tenure of President Hopey-Changey, superficial patriotism is actually on the rise, especially in the sporting world. These days, it is not enough to merely have the National Anthem sung prior to an NFL game, but it must be accompanied by a field-sized flag held up by dozens of service members while a formation of fighter jets buzz the stadium (all at taxpayer expense, no doubt). Meanwhile, the singing of God Bless America has invaded baseball's 7th inning stretch along with countless in-game tributes to "the troops." Some teams like the San Diego Padres and Cincinnati Reds even go so far as to wear "camouflage" uniforms on occasion. I'm so old that I recall a time back when I served during the dark ages (the 1980s) that military people would get greatly offended at seeing any civilian wearing any outfit that remotely resembled "THE uniform." Not anymore, apparently.

Nevermind too, that unlike in previous generations none of the young millionaires on the field are ever going to be at risk of having to actually go fight in America's countless imperial wars. Nope, no modern day Ted Williams will ever lose four of his prime playing years while in uniform. Heck, the one NFL player who put his money where the league's supposedly patriotic mouth is and volunteered after 9/11 managed to get himself killed by friendly fire in Afghanistan. Other players may call Pat Tillman a hero, but none of them have seen fit to emulate his example (the volunteering part, not getting killed that is).

Then, just when it seemed there was no limit to how far a sports team (and the apparel companies who dress them) could go with their mindless military fetishism, the Northwestern University football team came up with the abomination pictured above. Nope, I didn't photoshop that picture, that's a (supposed) Northwestern player wearing a flag-themed uniform splattered with fake blood. Incredibly, that uniform was supposedly worn to help raise funds for the Wounded Warriors project, which is kind of like a cancer charity selling tee-shirts depicting a full blown metastatic tumor.

Just as disgusting is that the uniform in question replaced the players' names with the words representing seven supposed "core values," to include: courage, duty, integrity, honor, country, service and commitment. None of which, I might add, have anything whatsoever to do with the disgusting and hypocritical world of big time college football.

In fact, it's gotten to the point where when I see any one of those seven terms used in the media, or other words such as "freedom" or "liberty" I automatically assume they are being used perversely in a way diametrically opposed to their true meaning. This is what happens when an empire teeters on the brink of collapse. Instead of recognizing what's really happening and trying to stave off catastrophe, the vast majority of its denizens shut their eyes and wave their flags harder and harder as if the resulting breeze will somehow cast away the boogeyman at the door.