Shockingly, Millennials Are The Most Cynical Generation Ever 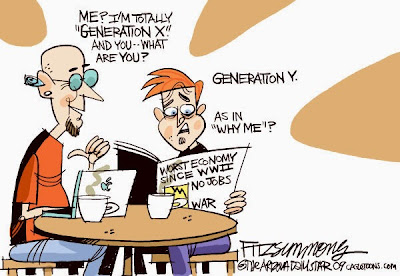 Tying into to yesterday's post about the plummeting popularity of President Hopey-Changey, who would have thought that America's coming-of-age generation could get so cynical? Don't take my word for it, here's the scoop from MTV News:


Generation Y grew up in the shadow of a decade-long war and an economic crash both caused by authority figures’ filthy lies faulty assumptions, so it’s no surprise that skepticism of government and corporations is running high — but researchers are now warning that young people’s cynicism toward social institutions and even fellow citizens is at unsustainable levels.

A new study from the University of Georgia compared 140,000 millennials’ responses to previous generations’ attitudes. Between 2000 and 2012, millennial approval of Congress plummeted from 49% to 22%. (Compare that to the 30% of baby boomers happy with Congress during the Vietnam years.) In the same timespan, millennial approval of corporations dropped from 54% to 33% — and the results are similar for organized religion, upper education, police departments, the media and…hmm, that about covers it?

I have to admit, I made it to almost 40 before I got to the point where I started to assume that just about EVERYONE in some position of authority was completely full of shit. Who says kids these days are just mindless consumers who are out of touch with what's really going on? But it gets even worse:


Just as troublingly, the Associated Press reports, only 16% of millennials believe that “most people can be trusted” today, versus half of Americans back in the 1970s. All age groups feel more cynical than they did 10 years ago, but the under-35 crowd is the most pissed off and paranoid.

Now those are numbers of a society that is splitting apart at the seams. There's no way any sense of "community" can be built in a country where nobody trusts ANYBODY. Now, we're just 318,000,000 isolated little islands out here...and that's EXACTLY the way those in charge want us to be.


Bonus: "You ask me what you need...hate is all you need"