No One Wants to Host the Olympic Games Anymore 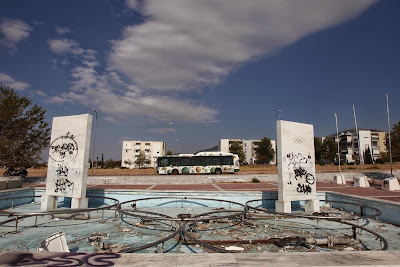 image: the ruins of the former Olympic Village, Athens, Greece

File under: Nobody Could Have Predicted.


Who's going to host the Winter Olympic Games in 2022? We're down to two finalists and this is all so exciting!

Exciting, that is, until you find out the two finalists are the last ones standing because no other city in the world wants to host the games.

Oslo, Norway announced yesterday that it was dropping its bid to host the 2022 Winter Games. Oslo was the third city — after Krakow, Poland and Stockholm, Sweden — to submit a bid and later cancel it after either public opposition or an inability to secure the combination of public and private funding necessary to stage the event. St. Mortiz, Switzerland and Munich, Germany both considered submitting bids, but the people of those cities voted against it in referenda.

So instead of taking place in a snowy, mountainous country packed with some of the world's greatest winter athletes and ranked No. 1 on the United Nation's Human Development Index, the games will be held in either Almaty, Kazakhstan or Beijing, China — two nations known for their poor records on human rights, free speech, and corruption. Beijing doesn't even have ski mountains.

Gee, and might there be another reason so many bidders are pulling out?


How we got here is pretty simple: Hosting the games has become such a massive, expensive, and unpopular chore that it's getting harder to convince anybody to do it.

Who really wants to deal with the massively unpopular International Olympic Committee (IOC), the Switzerland-based governing body that's notorious for its corruption, general awfulness, and insistence on being treated like royalty through the bidding and hosting process? Andrew Jennings of the Nation called its 100-or-so members "ideal candidates for a perp walk" and "a foul band reeking of corruption" that's overseen an Olympic bidding process that functions like an elaborate, bribe-tainted courting ritual.

So, with an utterly corrupt bidding process, potential bidders being financially strapped, voters in (still nominally democratic) countries firmly opposed to the huge costs involved, who among the world community might still be interested in hosting the Olympics?


...it's possible that we're moving toward a state of Olympic affairs in which the most eager bidders and biggest spenders are autocratic and oligarchic nations. For them, the Olympics offers a convenient way for the wealthy to further enrich themselves, for the powerful to consolidate their power, and for governments and leaders to parade their influence and relevance in front of their own citizens, and the world.

Berlin 1936 anyone...anyone? That worked out pretty well as I recall in tamping down Germany's growing lust for another major war.

But don't worry, Olympics fans, there is at least ONE major world capital interesting in hosting the 2024 Summer Games:


The effort to bring the 2024 Olympics to the Washington, D.C. region took another big step Thursday.

Local nonprofit DC 2024 launched its public website around 8 a.m. The site is one of the first public efforts to build widespread support for the Olympics bid.

"Today's announcement that a leadership team has been formed for Washington 2024 means that our region's bid to host the Olympic and Paralympic games has kicked into full gear," said Arlington County Board Chair Jay Fisette. "...We agree with Washington 2024 that this is an historic opportunity for our region to be part of the Olympic Movement."

That's right folks, it's YOUR imperial capital! Which, come to think of it, fits the definition quite well of an oligarchic city looking for "a convenient way for the wealthy to further enrich themselves, for the powerful to consolidate their power, and for (the) government and leader to parade their influence and relevance in front of their own citizens, and the world."