The Irish are Revolting 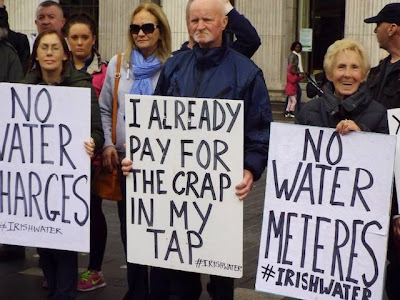 I wanted to highlight this story from Vice.com because it has a little bit of everything. Let's start with massive protests over IMF-inflicted austerity measures forcing people to pay through the nose for a commodity they literally cannot live without:


After years of passivity in the face of austerity, anger in Ireland has finally spilled over into public protest because people are going to have to start paying for their water.

Yes, Ireland is set to become one of the few countries in the world with mandatory water meters. This means its residents will be paying more than most Europeans do for water, whereas before it was paid for by taxes. It wouldn't be quite so outrageous, people say, if Ireland's water didn't routinely fail testing by the country’s environmental watchdog, the Environmental Protection Agency (EPA). In some places, the water is so unsafe that drinking it will see you expelling it out of one of your orifices at high velocity for days. So people aren't too keen to pay for the privilege. Demonstrations are being attended by crowds who park their cars and bikes in front of proposed sites for water meters, and the police have been guarding workers who are installing the hated things.

Workers who are watching as their prosperity slowly slips away who can't afford to pay:


The charges—which will average out to an annual charge of €278 ($355) for a family of four—were a condition of the EU-IMF bailout to Ireland in 2010...The "What’s Left" tracker carried out by the Irish League of Credit Unions found that 1.8 million people in Ireland—close to half the population—have less than €100 ($127) left every month after paying their bills.

Oh, and you can toss in a little enriching the oligarchy at the expense of everyone else:


The contract to provide the expensive and mandatory process of metering was given to a company called Siteserv, despite Siemens offering to do the job for free. Everyone found this pretty baffling. Siteserv is owned by Irish media mogul Denis O’Brien, Ireland’s third-richest man. He has a history of dodgy dealings—a tribunal found "beyond doubt" that he had made payments to a former communications minister, who then influenced the bidding process for mobile phone licenses that O’Brien’s company, Esat Digifone, then purchased. So he's also pretty unpopular, and the assumption is that the meters will further enrich him.

And finally, like a cherry on a shit sundae, the slow collapse of aging infrastructure:


Many Irish people have to boil their water before they drink it so it doesn't make them ill. For those, Irish Water has promised a whopping 50 percent discount for the first three months, which obviously hasn't done much to silence the outrage.

Oh, and almost half of water in Ireland is wasted in transit as it leaks out of pipes.

Goddam, Ireland, sounds like you've got a Downward Spiral perfect storm on your hands.


Bonus: "No mercy, no quarter...they'll pay for their sins"