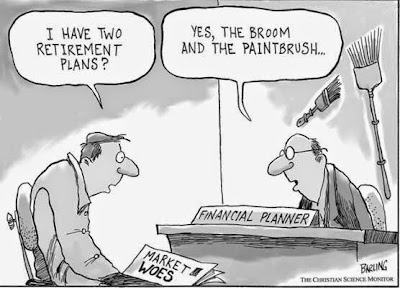 Per yesterday's post, I guess it isn't just the young'uns who know they're screwed. From the L.A. Times:

"Nearly a third (31%) of all respondents say they will not have enough money to 'survive' on in retirement," the bank says. "This increases to nearly half (48%) of middle-class Americans in their 50s."

Ahh...that younger segment of the Baby Boomer generation. Guess it really is better to die before you get old.

There was another quote from this article that I found particularly horrifying:


There's little new in these findings. They echo the findings of last year's installment in the Wells Fargo series, when more than a third of respondents said they expected to work at least until 80 to have enough to retire on.

Yikes! That's not "retiring," that's called "dying in the saddle."

I had a discussion recently with my brother-in-law. He hasn't made the best decisions in life. He failed to use his bachelor's degree to get a good paying white collar job despite residing in the high cost of living New York City area. After having four kids he dumped his wife for a fellow divorcee who has a young child of her own, and then they had yet another child before the two of them even got married. Now his oldest are reaching college age and are enlisting in the military partly to escape what has become a depressing family situation, but also for the tuition benefits. BIL was reflecting on the fact that I was able to take early retirement (due in large part to the cancer) because, among other things, my wife and I lived frugally and paid off our house even before I got sick.

"I'll retire on the day I die," he stated to me rather matter-of-factly. Problem is, he works a blue collar job that takes a fair bit of physical effort, so I wonder if he won't begin to physically break down long before it is time for him to shuffle off this mortal coil.

As for me, even if I hadn't gotten sick the idea of working until I'm 80 fills me with horror and dread. It's not that there aren't plenty of things that I could do until I'm that old (especially writing), it's just that none of those I enjoy doing are likely to pay me anything resembling a living wage. I'm very grateful to have been able to leave the rat race at a relatively young age, but in my case it remains to be seen if the hangover effects of my cancer battle will prevent me from doing many of the things I had hoped to do in retirement.

But enough about me. Let's finish the discussion of this article with another interesting tidbit:


All this points ever more strongly to an inescapable solution to Americans' retirement quandary: expanding Social Security. The program is immune from market influences, operates with rock-bottom administrative costs, and forces workers to place saving for retirement front and center.

Those who claim that increasing benefits is unnecessary because America's retirees are secretly rich -- a notion recently bandied about by independent benefits consultant Sylvester Schieber and Andrew Biggs of the American Enterprise Institute -- may need to get out and meet middle-class workers more. They would learn very quickly that middle-class Americans aren't laboring under the same misconceptions about their retirement prospects.

Forgetting for a moment that the Social Security program has its own long term financing problems, note the sheer fucking arrogance of these two assholes from the American Enterprise Institute. Do YOU know anyone in your social circle who is "secretly rich?" No, I don't either despite having a number of friends and acquaintances who are solidly upper middle class. The fact that these these two billionaire mouthpieces can get away with publicly saying such utter shit and not be tarred, feathered and run out of town on a rail is a big part of the problem in this country.