Two-Thirds Of America's Biggest Retailers Are Worried About Flat Wages 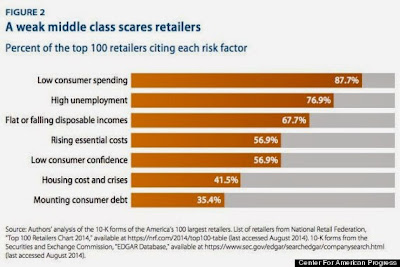 (editor's note: I currently have a small backlog of posts and aim to have one up every day this week--so be sure to check back frequently!)

You really have to laugh about this one, lest you not begin to cry. It seems the same asshole American retail companies who pay their employees shit wages are now quite concerned that their bottom lines are being negatively affected by employees being paid shit wages. Here's Huffington Post with the story:


Sixty-eight percent of the top 100 retail companies in the U.S. -- a group that includes, Walmart, Apple, McDonald's and J.C. Penney -- say the country's stagnant wages pose a major threat to their bottom lines, according to a new report by the Center For American Progress, a left-leaning think tank.

Researchers analyzed the most recent SEC 10-K filings of the largest 100 retailers in the country and found that more than two-thirds of these corporations issued warnings to investors that profits could be hampered by flat wages, high unemployment and low consumer spending. The trend is hammering companies that target high-income customers, like Whole Foods and Dillard's, and those that market to low-income shoppers, like Dollar General and T.J. Maxx, according to the report.

So, do you suppose this concern is enough to get these companies to actually raise their employees' salaries to a decent living wage? Of course not. Apparently, all the other companies BUT them are supposed to do it:


But even as two-thirds of the companies in the study pointed to stagnating wages as a source of their problems, many of them have opposed or stayed silent on any proposed wage increases. There are a few notable exceptions. Gap promised to institute a $10 per hour minimum wage by next year, and Costco's starting pay is already $11.50.

Oooh, those Gap and Costco employees are living large aren't they? Just for the record, $10 bucks an hour equals a full time annual wage of just $20,800--assuming they are allowed to work full time. How much disposable income do you suppose a head of a household is going to have on that kind of miserly salary? The article goes on, but you get the idea.

It's too bad so few Americans know anything about their own history. If they did they might recall that Henry Ford, when he was in the process building one of the world's largest automobile companies, recognized that there wouldn't be anyone able to afford to buy his product unless he paid his own employees a decent wage. Other companies followed suit, and it was these actions that were businesses' historical contribution to creation of the American middle class.

So what happened? Well, it seems that builders like Ford who knew their every little facet of how their companies operated were eventually replaced by greedy MBA assholes who'd never spent a day actually doing the work of those companies, and didn't give a shit about anything but the short term bottom line and their own pay, stock options and golden parachutes.

We've been told over and over and over again that "the consumer is the driver of the American economy." But when the consumer gets squeezed to the point that they no longer have any discretionary income, sooner or later the big corporations will have succeeded in killing the geese that lays their golden eggs. For nearly two generations now, American business has been operating under the mantra that "greed is good," and as a result now it isn't geese but chickens that are coming home to roost. And those are some sorry-ass, scrawny-looking chickens at that.