The (Almost) $18 Trillion Question: Does it Really Matter? 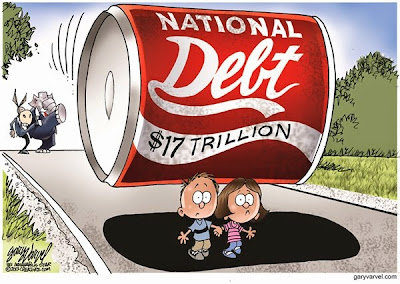 Yep--the calendar on the wall may still say it's 2014, but to the friendly folks who run YOUR United States Government, Fiscal Year 2015 is already upon us. Break out the party favors and the champagne, we gots lots to celebrate. Or maybe not.

Actually, I figured this would be a good time to resurrect one of my old hobbies, namely checking in with the federal government's own Debt to the Penny website and see how our national indebtedness situation is doing. Hmmm, not so well actually. As of the beginning of the new fiscal year, America now has an imbalance of $17.875 trillion, around $1.1 trillion more than it owed exactly one year ago.

While it is true that the past few years the annual federal deficit has fallen by about one-third from where it stood during the depths of the financial crisis, the government is still borrowing more than twice as much every year as it did in ANY year prior to FY-2009. In fact, since 10/1/2008, the national debt has risen by almost $8 trillion, so even with another two years of no increase in the annual deficit we'll still have managed to double the total amount of the national debt in just eight years (or the length of Obama's presidency) and THAT comes after we had already doubled the national debt during Bush's presidency.

Another interesting factoid that comes right from Debt to the Penny is who holds our debt. This is divided into two categories. The first is Intragovernmental Holdings, which is defined thusly:

In other words, largely Social Security. The second is so-called Public Debt:


The Debt Held by the Public is all federal debt held by individuals, corporations, state or local governments, Federal Reserve Banks, foreign governments, and other entities outside the United States Government...

The reason I bring up the difference is that there is something quite interesting about the additional $8 trillion we've racked up since 2008--namely, it has nearly all accumulated in that second category. Whereas the two types of federal debt were nearly even six years ago, Public Debt now exceeds Intergovernmental Holdings by approximately $7.7 trillion.

So why is that important? Well, consider for a moment who it is buying all this federal debt. According to National Priorities.org, approximately 46% of all U.S. debt, amounting to about $8.2 trillion or two-thirds of all Public Debt, is held by either the Federal Reserve or "International Investors," i.e. the central banks of other nations.

Collectively, the world's central banks are literally propping up the finances of the USG, and without that support the entire house of cards would instantly come crashing down. Yet the U.S. blithely continues to "borrow" more than a trillion dollars each year, even as it shakes a scolding finger at "deadbeat" nations such as Argentina.

I keep asking that question because many have predicted that America was going to strangle itself with debt--that borrowing a trillion plus dollars each year is unsustainable. Heck, I'll admit I've said it myself plenty of times. Never would I have believed four or five years ago that this country could keep borrowing at such a frantic rate and, not coincidentally, manage to keep interest rates at effectively zero without the whole thing blowing up on us long before now.

And yet, somehow it hasn't. Why? Well, if I knew the answer to that one, I'd be a one-percenter's one-percenter and wouldn't just be some obscure blogger sitting on his basement couch, screaming into the wilderness.

So does it matter? I'm going to have to throw up my hands and say, no, I guess it really doesn't.

Until the day finally comes when it does.