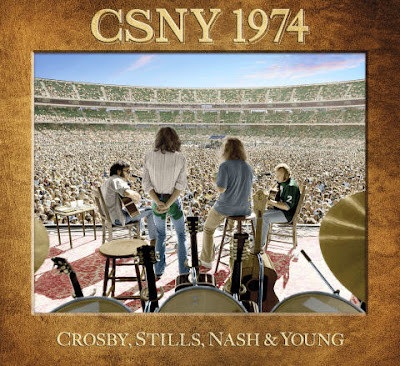 They don't make rock'n'roll "supergroups" anymore. Come to think of it, they never let any musician who has anything remotely important to say anywhere near the Top 40 anymore either. In many ways the quartet of David Crosby (originally of the The Byrds), Stephen Stills (originally of Buffalo Springfield), Graham Nash (originally of The Hollies) and Neil Young (Stills's Buffalo Springfield bandmate, but a remarkably prolific solo performer alone and with his own band, Crazy Horse) personified the medium in America at the very height of its power. They first came together at Woodstock, streaked like a meteor across the rock landscape in the late 60s and early 70s, fell apart amid bickering and backbiting as the latter decade wore on--and then reunited several times as a bad caricature of their former selves (mostly without Neil Young, who despite soaring ups and downs in the ensuing decades unlike the others remains a vibrant and relevant artist to this day).

In 1974, the quartet hit the road for a string of stadium shows just as Richard Nixon (whom the band had lambasted on its most memorable song, the Kent State shooting protest scorcher, "Ohio") was preparing to resign (and in fact, after Nixon did his memorable helicopter exit from the White House lawn, Neil Young wrote a quick casual ditty called "Goodbye Dick," which is included here). CSN&Y recorded nine of the shows with the intention of producing a live album, but the tour descended into such a morass of drug-and-sex fueled hedonism (backstage anyway) that bad feelings kept the tapes of the shows under wraps for nearly 40 years.

Fortunately for us aging rock'n'rollers who haven't yet died even as we are getting old, the creme de la creme of the recordings from that tour have now been released as "CSNY 1974," which contains 39 portions of pure classic rock goodness. For whatever excess the band members may have been engaging in while producing this fine music, it never spills out onto the stage (at least on those tracks that were released).

Particular highlights for me include a soaring nine-and-a-half minute version of "Suite: Judy Blue Eyes," "Immigration Man", a song which is still topical four decades later, a rollicking version of Still's solo hit, "Love the One You're With" and a hard driving seven minute version of Crosby's anthemic, "Almost Cut My Hair." But one truly interesting moment comes during the group version of Nash's virulent antiwar tune, "Military Madness," when the band gets the audience, who presumably were nearly all (then-young adult) baby boomers, to chant along as they repeat over and over "no more war!" It's ironic that Nixon ended the draft in 1974, and knowing they were now safe from being sent to die in Vietnam a vast majority of that same audience was about TO cut its hair and go to work for "the man," if they hadn't done so already.

There are many debates about when "the 60's" as a cultural phenomenon actually ended. Some say it was at Woodstock, some say Kent State. But an argument could be made that the forced resignation of Richard Nixon represented the real high water mark of "people power" that would not be seen again in this country. And as it so happened, just as Tricky Dick was galavanting off into the history books, four musicians who represented the political opposition to him as much as any did expended what remained of their group relevancy in one last blast of glory--the likes of which would also never be seen again in this country.


Bonus: Unfortunately, "Military Madness" is unavailable on You Tube, so here is the blistering version of "Ohio" instead

Extra Bonus: "And if you can't be with the one you love, honey, love the one you're with"