Being Poor is Killing Off White Americans--Really 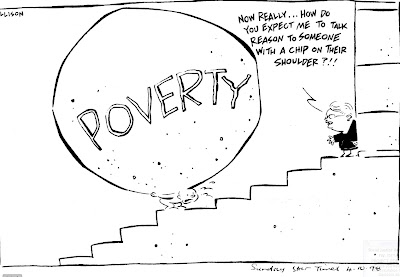 For those of you who think that the population "die off" that is expected to occur as the long era of fossil-fueled economic growth gives way to scarcity and permanent economic contraction lies many years in the future, I've got a surprise for you. It's already happening:


For generations of Americans, it was a given that children would live longer than their parents. But there is now mounting evidence that this enduring trend has reversed itself for the country’s least-educated whites, an increasingly troubled group whose life expectancy has fallen by four years since 1990.

Researchers have long documented that the most educated Americans were making the biggest gains in life expectancy, but now they say mortality data show that life spans for some of the least educated Americans are actually contracting. Four studies in recent years identified modest declines, but a new one that looks separately at Americans lacking a high school diploma found disturbingly sharp drops in life expectancy for whites in this group. Experts not involved in the new research said its findings were persuasive.

The reasons for the decline remain unclear, but researchers offered possible explanations, including a spike in prescription drug overdoses among young whites, higher rates of smoking among less educated white women, rising obesity, and a steady increase in the number of the least educated Americans who lack health insurance.

The steepest declines were for white women without a high school diploma, who lost five years of life between 1990 and 2008, said S. Jay Olshansky, a public health professor at the University of Illinois at Chicago and the lead investigator on the study, published last month in Health Affairs. By 2008, life expectancy for black women without a high school diploma had surpassed that of white women of the same education level, the study found.

White men lacking a high school diploma lost three years of life. Life expectancy for both blacks and Hispanics of the same education level rose, the data showed. But blacks over all do not live as long as whites, while Hispanics live longer than both whites and blacks.

“We’re used to looking at groups and complaining that their mortality rates haven’t improved fast enough, but to actually go backward is deeply troubling,” said John G. Haaga, head of the Population and Social Processes Branch of the National Institute on Aging, who was not involved in the new study.

Notably absent from the above analysis is that being poor in a hyper-materialistic society in which social services are substandard at best and public transportation depending on where you live is inadequate to non-existent, really sucks balls. Throw in the callus attitude so many Americans have towards the less fortunate and it is a wonder that they manage to live for as long as they do. But hey, the hard core Randians should be happy to hear this as it means that there are going to be fewer "parasites" around sucking down their precious "hard earned" tax dollars.

Also of note from the article, a little vindication for author Dmitri Orlov:


The five-year decline for white women rivals the catastrophic seven-year drop for Russian men in the years after the collapse of the Soviet Union, said Michael Marmot, director of the Institute of Health Equity in London.

And as if comparisons to the collapse of the Soviet Union were not bad enough:


The dropping life expectancies have helped weigh down the United States in international life expectancy rankings, particularly for women. In 2010, American women fell to 41st place, down from 14th place in 1985, in the United Nations rankings. Among developed countries, American women sank from the middle of the pack in 1970 to last place in 2010, according to the Human Mortality Database.


Bonus: "Born down in a dead man's town"