Bangkok: Neither Fast Nor Furious 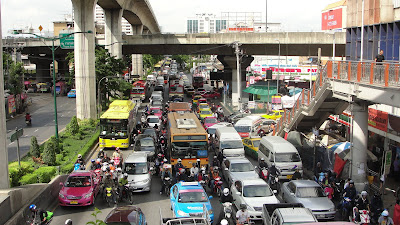 Continuing on with my observations from my recent trip abroad, I wanted to say a few words about the city where we spent most of our time: Bangkok, Thailand. If you want to know what the near term future of urbanized humanity looks like, I humbly suggest you'll find no better model. One tour book referred to Bangkok as the "Blade Runner City," and that description isn't too far from the truth. One night we had dinner in an open air restaurant perched on the 54th floor of local hotel (yes, really) and the view of the seemingly endless stretches of skyscrapers and their flashing neon lights was simply breathtaking. Moving down to ground level, however, quickly brings to mind the title of globalization apologist Tom Friedman's book: hot, flat and crowded.

The most striking thing about Bangkok is how massive wealth and abject poverty exist literally shoulder to shoulder throughout the city. Luxury high rise condo towers will actually have multilevel hovels buit right up against their sides. Take a walk on the crowded streets and you'll pass through countless open air markets selling everything from fresh foodstuffs to cheaply made manufactured good produced in nearby sweatshop factories. But if you keep walking until you reach the famous Sukhumvit Road, you'll find a seemingly never ending stretch of gigantic indoor shopping malls selling every luxury good imaginable in over-air conditioned comfort. Indeed, it is hardly unusual to have to step around a beat up looking female beggar holding her badly malnourished child as you venture to buy that Kate Spade designer hand bag that costs more money than the poor woman will see in a year.

The old part of the city is particularly spectacular, with its many Buddhist temples and various historic shrines and monuments. The Thai people are generally very welcoming and friendly, though you always have to be on your guard that the friendly tuk-tuk driver promising to take you to a particular tourist site for the equivalent of a few dollars isn't instead intending to detour you to his brother-in-law's jewelry store or tailor shop. After a couple of days immersed in the city's intoxicating rush, I began to see why many farang (as the Thais refer to all those of European ancestry) fall in love with the place even if the omnipresent year round heat and humidity would be a deal breaker for me.

Then there is the traffic. The picture above is one I took of a typical midday backup at a traffic light on a Bangkok surface street. To say that Bangkok is a city where the quality of life would be vastly improved if it had a lot fewer cars is an understatement. During the day, cars choke every street, alley and avenue, making even short vehicular trips a time consuming adventure and forcing pedestrians to be constantly on their guard lest they get run over and left for dead in a city where there is no ambulance service and going to the hospital means paying at the time of treatment. It is not unusual to see motorbikes actually driving along a crowded sidewalk, weaving around pedestrians in order to gain a slight advantage over the rest of the traffic.

Walking around, I quickly learned that the key to safely crossing any street on foot, even at a designated cross walk, was to follow the locals, who seemed to have a sixth sense as to when they could defy the moving wall of steel and rubber without getting splayed out on the pavement. Making matters more unpleasant, the exhaust from all of those idling vehicles combines with the high amount of water vapor in the air to create a noxious mess that many Thais try to avoid by means of wearing surgical masks out in public.

The sad part is that Bangkok does have a more robust public transportation system than do most American cities. The key features are a subway system and a sky train, which are both clean and efficient to ride, even if extremely crowded at rush hour. Moreover, most denizens who work in Bangkok appear to live in the city itself rather than in soulless, far flung suburbs. It's a place that could and should be much more walkable than it is. Sadly, like those gigantic air conditioned meccas of consumerism along Sukhumvit Road, the Thais have apparently bought into the self-defeating American notion that owning an automobile equals success in life, even if it means they have to spend half of their waking lives sitting immobilized and choking on fumes.

The other thing I noticed is despite the fact that you can easily and quickly down an entire meal of various fruits, vegetables and cooked meats from market stalls and carts on just about any street corner, there was also a distressingly high number of American fast food outlets, particularly McDonald's and Kentucky Fried Chicken. I guess many Thais must also equate eating that highly processed garbage with success, even though it is both healthier and cheaper to patronize the market stalls. Chalk it up as one more temporary victory for globalization that, like those massive traffic jams, will last only as long as the world's fossil fuel supplies hold out.


Bonus: "I'd let you watch...I would invite you...but the queens we use would not excite you"