A Preview of America's Future as Desired by the Oligarchs 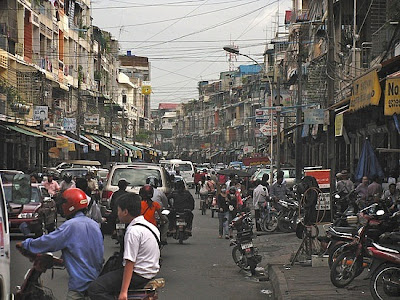 On Saturday, Dave Cohen of Decline of the Empire blog posted about a new book called The Betrayal of the American Dream, in which authors Donald Bartlett and James Steele discuss the ongoing destruction of the American middle class. As Cohen rightly points out, what most Americans, raised in a maddeningly insular society in the midst of the post-World War Two economic boom, do not understand is that their very existence as non-elites enjoying any genuine prosperity is an historical anomaly. The fact that the predatory sociopaths who really run the country are in the process of taking back what they feel was "stolen" from them by the New Deal and Great Society programs is not nearly as astonishing as is the ease and speed by which the dumbed down and media benumbed citizenry is allowing them to do it.

So where is it all heading? Well, assuming that enough energy supplies remain to be exploited to allow the elites to maintain control, which given the all out exploitation of the world's remaining energy reserves that is currently going on seems likely to continue for many years yet, I think I know the answer to that question. In my own post from Saturday, I briefly mentioned that I have been reading the book Cambodia's Curse by journalist Joel Brinkley, a recently published history of that unfortunate country. Brinkley spent a couple of years travelling around Cambodia interviewing everyone from top officials to dirt poor farmers and the portrait he draws is both arresting and frightening in its implications. Whereas Brinkley is attempting to tell Cambodia's sad story to the outside world, I chose to see what he has written as a warning of what our own future potentially holds for us.

Because you see, modern Cambodia is actually Republican vice presidential candidate Paul Ryan's wet dream. Imagine a nation where the government's only real role in the lives of the citizenry is to provide for the national defense and to build roads and bridges in order to enable commerce. Imagine a country where other than a few select elite government officials like Paul Ryan, every civil servant is paid at most a few dollars a day with no health or retirement benefits whatsoever. Imagine a nation where every natural resource, including vast tracts of lush hardwood forests, is stripped down and illegally sold abroad to line the pockets of its kleptocrat rulers. Imagine, too, a country where workers have zero rights vis-a-vis their employers, who pay them as little as they can possibly get away with. If Ayn Rand were still alive, she would probably be having spontaneous orgasms just thinking about it while conveniently ignoring the fact that Cambodian dictator Prime Minister Hun Sen used to be a dirty rotten communist, though one could argue that Pol Pot was the ultimate real world John Galt.

So how much fun is it to be an ordinary citizen in such a country? Oh loads, as long as you don't mind giving your children a wad of Riel every morning so that they can bribe their teacher so he will agree to actually teach them that day even though he might only have a third grade education himself. Oh, and if your precious snowflake is particularly dense, you can give the teacher another bribe to ensure that she passes her final exams. This method of "education" then continues right on up the line and even into the universities and medical schools, with those who do have the means paying bribes to ensure they eventually earn their diplomas.

Speaking of medical schools, when you get sick or injured and have to go to the hospital, you'll need to pay a bribe to that doctor who bribed his way through school in order to get him to treat you at all. If you don't pay him, you'll be given long expired medications if any at all, and left in a bug infested ward on a straw mat to recover or not more or less on your own.

You could try to complain to the police about the doctor's request for a bribe, but unless you bribe them they won't investigate, and unless you bribe the prosector he won't bring a case and unless you bribe the judge you won't get a ruling in your favor anyway. And then on your way home from court, you might be stopped at a random police roadblock and have to pay another bribe so they will overlook the fact that your left tail light is out or your driving license is expired. Oh, so you say you want to renew that driving license? If so, you'll have to bribe the local government official who is in charge of issuing licenses--doesn't matter if you actually know how to drive or not.

Let's then say you become sick and tired of all this corruption and want to launch a public campaign against it. Great. Just be mindful that when you try to have a public rally to support your cause, some disguised government thug may throw a grenade in the midst of it and then the police will blame you for trying to score political points against the regime by killing and maiming your own supporters.

Yep, Cambodia is true worker's paradise. It's the type of place where your boss, a military officer, can order you to go by motorbike and pick up a rare endangered animal so that it can be illegally transported to China to be eaten. Just don't let that animal accidentally escape, or you'll have to face the wrath of your boss, who might just be so enraged that he will douse you with gasoline and set you on fire, and when you die your wife and child will be left destitute. Surely, you think, that if an employer tried such a thing the press would find out and make a big stink about it, right? Well, they would, except that the newspaper reporter went to the army officer and requested a bribe so that the story would never be published.

This is just a little taste of what it is like to live in a country that has been stripped of most of its resources and where the unaccountable elites feel no obligation to provide any kind of safety net for its citizens. This is exactly the kind of society our own predatory oligarchs are slowly establishing here in America. If you don't believe it, ask yourself how if providing for the less fortunate is an unalterable established political consensus several American public officeholders have within this last year publicly compared the food stamp program to "feeding wild animals?" Even five years ago, such utterances would have been unthinkable in the public arena. That's just one small example of how the public rhetoric, to eventually be followed by public policy, is evolving--or rather devolving--in America these days. Not incidentally, impoverishing the working and middle classes has the added benefit of stretching out the availability of the planet's increasingly scarce resources. That, as any Harvard educated MBA would tell you, is a classic example of a win-win.

The Betrayal of The American Dream is very good way of portraying what is happening in this country, though it really only tells half of the story. The sad fact is that the betrayal would not be happening without the active complicity of so many average Americans. Starting in earnest around 1980, a vast majority of this country's citizenry chose to shut off their brains and turn the "thinking" about America's future over to frauds and charlatans, starting with Ronald Reagan, who promised easy answers while initiating the betrayal. Thirty years later we are now collectively reaping our very just rewards for our failure to recognize who the real enemies are.


Bonus: "I have only committed this mistake...of believing in you, the Americans"