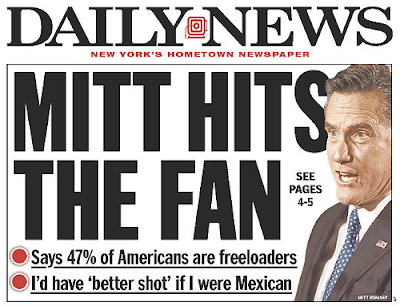 No really, I do. I live and work in the inner DC suburbs of Northern Virginia. Arlington, Alexandria, Falls Church and Fairfax County--combined those four jurisdictions, which have well over one million people, gave President Hopey-Changey nearly two-thirds of their votes in 2008. So presumably, they are part of the 47% the Mitt the Twit was deriding by saying they are looking for handouts and don't pay taxes.

Only one little problem with that assertion, namely that Arlington, Alexandria, Falls Church and Fairfax County are also among the richest addresses in the nation in terms of per capita income. There are more McMansions, Lexuses, boutique luxury shops and high end restaurants around here than you can shake your gold-plated walking stick at. I mean, this place is literally CRAWLING with liberal upper middle class nitwits...who, and I guess this does actually need to be pointed out, pay a shitload of fucking taxes. Not only are many of them in the highest income tax bracket, but the property taxes around here will take a bite out your ass as well. We even have the odious Virginia state personal property tax on vehicles, which stings all those Lexus drivers pretty good.

What's more, this is not the only wealthy liberal enclave by a LONG shot. My sister-in-law resides in a similar community in suburban Boston, my brother-in-law in another such area just outside New York and my own father and brother in the affluent college town of Charlottesville, Virginia. To say that all Obama supporters are looking for handouts and don't pay taxes is just plain daffy.

Of course, then there is the other little problem that according to the polls, Romney's most steadfast voting block is white people over the age of 65, in other words "welfare queens" who as a group suck down far more in Social Security and Medicare benefits than they've ever paid into the system. And don't get me started about a fucking filthy rich asshole who pays a tax rate on his endless array of investments that is less than HALF of what people pay who actually have to work for a fucking living.

I've stated on this blog that the only two ways Willard can win this thing is if the market melts down before election day or the Middle East completely blows up (or both). This first scenario is looking highly unlikely, and even the protests against the inflammatory The Innocence of Muslims movie have died back a bit. Obama was already looking really good for reelection before Romney's dumbass 47% comments came to light. Now, much to the chagrin of those of us who would love to see his fucking sellout ass humiliated, he looks like a virtual lock.


Bonus: "Damn these hard times, damn the coal mine, damn the good dreams gone cold...and while I'm at it, damn this crooked road"