Where the Peak Oil Community Got it Wrong 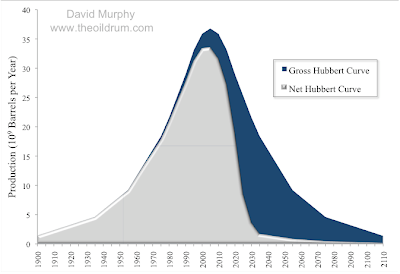 So, here we are roughly four years after the first huge peak oil-related spike in oil prices helped trigger a major market meltdown and nearly caused the world's banking system to seize up. It was quite a scary time for me personally...not only did it seem like some of the more dire peak oil prophecies of a fast collapse of civilization were about to come to pass, but I had also just suffered a total ACL tear in my left knee and was worried about being crippled just as the crisis was coming to a head.

Flash forward four years later, and not only are corporate profits soaring, but the stock market is back to pre crash levels. There are still many ominous economic storm clouds on the horizon and much of the damage from the crash has been merely papered over, but each time it looks like another crisis is about to unfold our economic overlords pull another rabbit out of their hat and "save" the day. Just how long they can keep it up is anyone's guess, but still the question must be asked by those of us in the peak oil community: how is it that more than four years after world oil prices spiked to $147 dollars a barrel our industrial civilization has thus far managed to weather the storm as well as it has?

Quite obviously, many of the predictions made by members of the peak oil community back in the wake of the 2008 price spike and crash were wrong, even if peak oil theory itself remains valid. It is only by analyzing what we got wrong that we may strive to try and avoid making such erroneous predictions in the future. This list below is by no means intended to be comprehensive, but merely represents some of the predictions made by peak oil analysts four years ago that have turned out to be incorrect.

1). The "bumpy plateau" will be short lived and world oil production will soon go into inexorable decline.

World oil production appeared to hit a peak in the spring of 2005, and despite rapidly rising prices did not increase for the next three years. For peak oil adherents this appeared to be the proof they were looking for that the theory was correct and that the world had entered the "bumpy plateau" period, and indeed now more than seven years later production is still mired near 2005 levels, particularly if we just consider crude oil and not "total liquids."

Where many peak oil commentators got it wrong was in predicting that the plateau would be a short lived phenomenon. The chart above from The Oil Drum was one of the scarier ones floating around during the 2008-2009 time period. The theory behind it was that rapidly declining Energy Returned on Investment (EROI) was going to cause oil production to decline just as rapidly...indeed according to the chart, we should already be seeing a dramatic reduction in world oil supplies. As we all know in hindsight, this has not happened.

A somewhat more sober view from peak oil analyst Tom Whipple predicted that oil production would start to decline in 2014. Whipple still has another year or so to see whether he was correct in that assertion, but it is looking more and more like he is going to miss the mark as well. More recently, Dave Cohen of Decline of the Empire blog has predicted that the plateau will last at least through the end of this current decade, which seems far more likely as producers pull out all of the stops to keep the pumps flowing for as long as possible.

Remember all those wild predictions that were made right around the time oil made its first foray into triple digits prices? Ten dollar gasoline seemed to be right around the corner and Mad Max would no doubt come riding over the horizon not long after that. To his credit, peak oil writer Charles Hugh Smith predicted in May 2008 that oil prices spiking to $150 would crash the economy, causing oil prices to crash as well...a mere two months before that actually happened. But even Smith then predicted that oil would shortly resume its relentless upward march towards an unthinkable $1000 a barrel.

It should be obvious by now that what is going to happen instead is that there will continue to be just enough demand destruction at the edges of the world economy to keep oil prices from shooting into the stratosphere. Already in the U.S., for example, the total number of highway miles driven annually has decreased the past four years after rising steadily from 1965-2008. The former members of the working and middle class in America are being squeezed by the bad economy and thus driving less, and the reduced demand is helping to keep prices in check.

3). The American economy is "built to run on $20 oil" and cannot survive high oil and gas prices in the long term.

No doubt this oft-repeated assertion, which assumes that a consumer economy based upon long commutes from the suburbs and people making endless trips to the mall to buy stuff they don't need is unsustainable if they cannot afford to buy gasoline for their cars is true in the abstract, but the fact is that the economy has also proven to be much more resilient to high oil and gas prices than most people in the peak oil community expected. After recovering from the 2008 crash, world oil prices have essentially been hanging around the $100 mark for nearly two years. According to Gas Buddy, the price of a gallon of gasoline in the U.S. has been solidly above $3.00 since December 2010. Conversely, the 2008 spike only sent prices to those levels for about 10 months, and there has been no corresponding crash of the economy as yet this time around.

Clearly, America's consumer economy has learned to adapt and survive on more expensive oil and gasoline. Just as clearly, there is no reason to expect that it won't continue to do so just so long as there are no rapid spikes in future prices. So why did many in the peak oil community get this prediction so wrong? I think it has to do with the assumption that I have made number four on the list below.

4). The government will stand idly by while the economy collapses.

This may not have been a specific prediction made by the peak oil community, but in hindsight anyone assuming there would be a fast collapse was also assuming that the governments worldwide would not pull out all of the stops to prevent it. However much we in the peak oil community have derided the massive amounts of federal deficit spending and the Federal Reserve's quantitative easing and zero interest rate policies, the fact is they HAVE stabilized the system. Call such initiatives unsustainable if you will, and you'll get no argument from me on that point, but they have worked to prevent a quick collapse and there is no reason to believe that they will not continue to work for some time yet. It is also undoubtedly no accident that the surveillance state is growing out-of-control just as we are reaching the point where it will be needed to prevent any outbreaks of massive civil unrest.

All of this is not to say that our industrial civilization is not in deep trouble, or that from a damage to the biosphere standpoint it would be better if collapse happened sooner rather than later. It's to say that with about 99% of population totally invested in the current system even if that system is treating them with utter contempt (what I call the REAL 99%), there is zero chance that there will be a demand from the public that the powers that be stop the madness and acknowledge our collective predicament. Even the most dedicated brie-nibbling, Prius-driving, Chardonnay-sipping, NPR-listening, Daily Show-watching, supposedly environmentally conscious Obama supporter would freak out if you told her that saving the world means that her precious snowflake won't be able to attend prep school. However much we may deplore the games being played to keep the party going for as long as possible, we should also acknowledge that as long those in charge can keep enough energy flowing to run the system from whatever sources they need to exploit, the chances that it will all come undone overnight are minuscule at best.


Bonus: "They won't want us to ask them, they are just going to want us to get it for them"