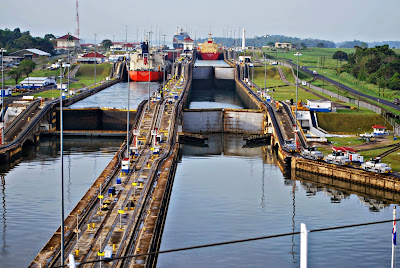 So I’m back to freezing my rear end off after a few blissful weeks in the tropics. Or at least as long as it took my cruise ship to sail from Ft. Lauderdale to Los Angeles via the Panama Canal. Seeing the canal was one item on my bucket list and yeah, yeah I know how environmentally damaging cruise ships are, but with my health condition there really wasn’t any other way for me to see it.

One thing to note about these giant cruise ships if you’ve never been on one. It is generally pretty easy to tell the difference between passengers (mostly older, fatter and white) and the crew (mostly younger, thinner and darker skinned). There are some exceptions to that rule: ship officers and the staff that greet you when boarding tend to be European born or even occasionally Aussie, Canadian or American. Some of the regular crew might also be European—but they are almost uniformly from former Soviet bloc countries, in other word the kind of people economically desperate enough to join their fellow Thais, Philippines and Chinese working six to eight months straight without a day off. And I mean without a day—these ships pull into their final port of call at 7:00 A.M., discharge 2,000 or more passengers, take on another load of 2,000 or more and are gone again within 12 hours. The profit margins for these boats are so slim that there is no other way the cruise lines can stay in business. But it must REALLY suck for the crews.

Anyway, for the most part I enjoyed my trip. Seeing the canal was as I said a lifelong dream, and some of the other ports of call in Colombia, Costa Rica and Nicaragua were fascinating if all too brief. I would have enjoyed the experience a lot more, however, were it not for having to spend so much time cooped up on board with my fellow passengers.

The very nature of cruising encourages you to get to know those you’ve embarked with. Unfortunately, the very length of this cruise (15 days) meant the passengers were overwhelmingly retirees as few working people can spare that kind of time all at once these days. That also meant the average age of those on board had to be about 70—in other words right in the wheelhouse of being the older half of the baby boomer generation and, worse still, though there were some Canadians, Europeans and Aussie passengers they were mostly AMERICAN baby boomers.

Let me paint you a gruesome picture—imagine a crowd of mostly pasty white, overweight Septuagenarians in bathing attire, some who had to tip the scales at twice to three times healthy body weight for their height (I had to dodge around a lot of “mobility” scooters as well). Now imagine being stuck among that same crowd for two weeks straight. I wouldn’t have even minded the sight of them so much as much as that talking to them revealed that many had as much blubber clogging the space between their ears as they did around their midsections.

One fine morning I was lounging in one of the hot tubs after a vigorous weightlifting workout in the ship’s (largely underutilized) gym when a particularly ugly old specimen climbed in and caused a large amount of water to slosh out over the sides. Dude seemed nice enough at first, and when I described my recent cancer battle said all of the right supportive things. Then he found out I was from the DC area and his brow furrowed. I’ll never forget his reaction: “Of course,” he said, “I’m a true rebel…I’m a proud member of the modern American Tea Party.” Yeah, a true rebel…one no doubt sucking down social security and Medicare benefits as fast he can, and one whose already horribly overtaxed heart would no doubt explode if he ever heard a shot fired in anger. Nevertheless, I was polite. I didn’t laugh right in his pudgy face.

It’s also standard on cruise ships to be seated for dinner each night at a large table with two to three other couples. Again, the people at my table were nice enough (and actually among the slimmer passengers on the boat), but whoo boy what a group of reactionaries. There was the 70s-ish orthopedist from Texas and his much younger Philippine second wife (a rare breakage of the ship’s demographics) who was quite impressed upon hearing about my cancer battle but who just couldn’t resist saying he hopes Ted Cruz runs for president. Probably not coincidentally, he also admitted to not ever reading any books beyond medical journals.

More disappointing was the naturalized couple from Chile who said they had fled their homeland for the states 40 years ago. Intrigued, I asked for details only to be horrified that it was the election of the “monster” Allende who had caused their flight and how grateful they were that Pinochet had “fixed” their country. Though I noted to myself that the Pinochet regime’s torture and murder of thousands of their “monstrous” countrymen weren’t enough to cause them to return from America—
which they claim to love because of all the “glorious opportunities" it offers people.

The nicest couple was actually the pair from Montana. For the most part I enjoyed talking to them—except the one occasion when the Vietnam vet husband went on an extended rant about Jane Fonda. One evening, he and the doctor were comparing the number of foreign countries they have visited in their lifetimes (85 versus 61). But here’s the sad part. Chalking up those numbers seemed to be merely a matter of bragging rights. Anytime I tried to bring up any deeper subject about any of the countries they mentioned having seen they could not have been less interested. So much for the idea that international travel—which so few Americans do anyway—would broaden their perspectives and make them more empathetic towards other nations and cultures.

After 15 days I was more than ready to flee the boat, even if it meant returning to an American homeland I had been desperate to get away from in the first place. I guess the rule is that if you want to get as far away from America as you can you also need to get as far away as you can from Americans. With a few exceptions. The one delightful and meaningful conversation I had during the cruise was with a retiree from USAID. There’s nothing like immersing oneself in third world poverty for much of one's career to give one a deeper perspective about the way the world really is.

So now I’m back, for better or worse. Oh, and if anyone gives a damn, in the wake of the cruise my “number of foreign countries visited” count is now up to 31.