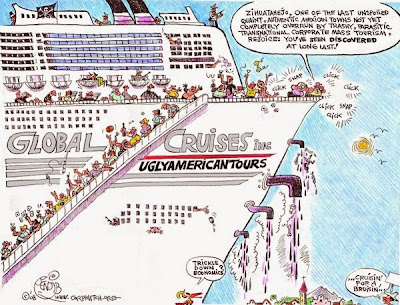 The travel and tourism industry has become such a scam these days. I’m so old I can remember a time when the advertised cost for say, an airline flight or a hotel room, was the actual price you paid and you didn’t get hit with hidden fees every time you turned around.

Due to my illness I hadn’t travelled much the past couple of years, so that might be why it felt like a bucket of cold water dumped had been over my head when I showed up at the airport—proud of myself for travelling lightly enough despite a fairly lengthy journey to be carrying just one large suitcase—only to be charged 25 bucks to check said suitcase. I’d have gladly paid that much more for the fare, but getting unexpectedly stuck in the ass like that on both of my flights really pissed me off.

That was bad enough, but what was even worse was not being informed ahead of time that I would be charged $45 a night to park my rental car at the hotel where I stayed after the cruise (oh, but I got a “great deal” on the room at Priceline!). I’d have told the good people at Hyatt to go fuck themselves on that little bit of highway robbery, ‘cept there wasn’t a public lot anywhere near the place. That particular outrage then got me wondering how these businesses get away with so obviously boning their customers in a country where it is normal for folks to BRAG about what a great deal they got on whatever particular crap it is they just bought, when I thought back to the passengers I was on the cruise with and it struck me: the top 10% in this country are literally partying like there is no tomorrow and it’s their loose wallets that are propping up the creaky American consumer economy.

As anyone whose has cruised in recent years well knows, when it comes to hiding extra charges nobody is better at it than the cruise ship lines. Want to drink any kind of alcoholic beverage during your time on board, or even have a bottle of water or a can of your favorite soft drink? Hotel prices for that, my friend. Want to go anywhere but the usually fairly ugly cruise ship dock at your exotic ports of call and ensure that you get back before the gangplank goes up and you get hopelessly stranded ashore? Oh, that’s another considerable extra charge. Want to generously tip the incredibly hardworking, underpaid staff who are stuck on board for six to eight months at a time? Oh, doesn’t matter if you want to tip them or not—that sizeable collective tip is automatically added daily to your on board account. If you want to give say, your stateroom steward something extra, that’s your call (actually, I was quite proud of myself as the company I booked the cruise with sent me a $500 on board credit, which enabled me since I cannot drink much these days to walk off the boat owing the cruise line just a bit over $11 more than my fare had been. Bet that pissed ‘em off).

But what was really amazing to watch was the relentless flogging of products. Not only did the ship have numerous shops selling “duty free” luxury goods (another scam I’ve never understood the attraction of), but just about every day there were “special” events featuring a different type of jewelry or other fashion accessory. And I know people were being suckered into buying the stuff because at dinner one night the wife of the doctor from Texas was flashing her brand new necklace, and a different night the husband of the couple from Montana was showing off his brand new “atomic” watch (I really have no idea and didn’t ask, was it powered by a tiny nuclear reactor?). What was really funny is that he freely admitted he had no idea how to even set the thing, and was glad that the clerk who sold it to him promised to adjust it to Montana time the night before the end of the cruise.

Even during the shore excursions we were encouraged to make sure we only shopped for jewelry at a cruise line approved jewelry store—ostensibly so we wouldn’t get ripped off by any surly, dark skinned third worlders—but in reality so the line would get its cut of the no doubt highly over inflated prices. And heck, if shopping really isn’t your thing, you could instead while away every night in the ship’s casino where, the activity newsletter reminded us daily, you could bet (and presumably lose) up to $3,000 nightly and have it charged to your on board account. Yep, if I weren’t the type who is perfectly content to park my ass on a deck chair with a good book to while way the lazy hours under the hot tropical sun I could have damn near bankrupted myself.

And after all, isn’t that what travel is REALLY supposed to be about? It isn’t about going to different places, seeing exotic sights, exposing oneself to different cultures and hearing different languages spoken. Nope, it’s all about doing the one thing you could just have easily stayed home and done—shopping. Because it isn’t enough to show off that flashy bit of jewelry to your friends back home—nope, you have just GOT to tell them all about how you bought it while floating somewhere off the coast of Costa Rica.

Yep, it’s people like this boatload of fat, old, pasty, mostly American baby boomers—not truly rich (or they’d have their own yacht) but upper middle class—who are still doing what their great “war president” instructed them to do to save their country after 9/11. Their portfolios were saved by the Wall Street bailouts, and now they're doing a great job of spending their kids’ inheritances. They're bucket listers merely crossing off one more item while frittering away a bit more of their accumulated wealth buying more shit they don’t need because they have completely forgotten (or never acknowledged) that they came of age during a brief moment in time when it looked like just maybe it was possible that their generation could lead the way as America turned its back on big business, war and empire and actually began to live up to its bullshit ideals.

Come on, people, smile at your brother. He just bought himself an atomic watch, whatever that is.


Bonus: "Good Lord, help us all...while we try to stay afloat. If you could Lord, send a boat"